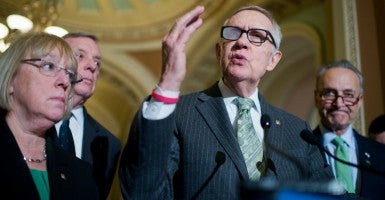 Amid the usual partisan infighting in Washington, there is one policy that for decades has won the approval of liberals and conservatives alike: prohibiting federal dollars from paying for abortions.

But now, a handful of liberal senators are backtracking on that commonsense and (up until this week) uncontroversial funding restriction.

The occasion on which they’ve chosen to pick this fight is on a bill to address human trafficking. Continuing to refuse to vote for cloture on Thursday, these senators have obstructed further consideration of the bill because it would prevent a new fund for trafficking victims from being used to pay for elective abortions, except in cases of rape, incest or when the life of the mother is in danger.

Known as the Hyde Amendment, the language has been attached to every federal appropriations bill for the Department of Health and Human Services since 1976.  Unlike most policies in Washington, this good and longstanding rider is widely supported by the American people and has won approval on both sides of the aisle for nearly 40 years.

So, why oppose these protections now? The answer: a powerful abortion lobby.

As Mollie Hemingway points out in The Federalist, it wasn’t until Planned Parenthood—the country’s largest abortion provider—and pro-abortion NARAL pointed out the inclusion of the Hyde language did some Democrats who had previously championed the legislation begin to drop support for the anti-trafficking bill.

The Hyde Amendment has been attached to every federal appropriations bill for the Department of Health and Human Services since 1976.

Planned Parenthood, which performs one out of every three abortions in America, gets over half a billion dollars in government funding each year. The organization doesn’t conceal its strong opposition to the Hyde Amendment, so it’s no surprise the abortion lobby is behind the current fight. What is troubling is that liberal senators are so quick to abandon a longstanding policy supported by large majorities of Americans just to curry favor with pro-abortion groups.

Regrettably, this isn’t the first time that abortion politics have been put before the care of human trafficking victims. In 2011, the Obama administration began requiring recipients of a federal anti-trafficking grant to be willing to provide referrals for abortion in order to receive funding.

The U.S. Conference of Catholic Bishops, which had been using a federal grant for the five previous years to compassionately serve victims of sex slavery and human trafficking, has a policy of declining to refer victims for contraception or abortion. Yet, despite having received higher scores of effectiveness than other organizations, the Conference lost the grant competition and was stripped of funding for its important work on behalf of vulnerable women, men and children.

Nor is this the first instance of pro-abortion lobbyists injecting themselves into policy-making. Members of Planned Parenthood and other abortion advocacy groups were closely involved in devising the controversial Obamacare mandate that forces employers to cover abortion-inducing drugs and devices and has spurred hundreds of federal lawsuits.

One step Congress can take to prevent future gridlock begin to challenge the power of the abortion lobby is by permanently prohibiting any federal funds from being used to pay for elective abortion.

The No Taxpayer Funding for Abortion Act, H.R. 7, would do just that by codifying the Hyde Amendment language and applying it across federal law. The House passed H.R. 7 in January—a good and long-overdue step to ensuring that the federal government cannot continue to entangle tax dollars with coverage for life-ending procedures. The bill is currently awaiting a vote in the Senate.

Americans deserve better than a popularly elected legislature beholden to the divisive and out-of-touch demands of a lucrative abortion lobby.