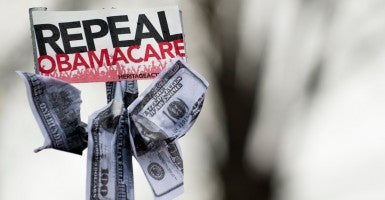 House conservatives want to use a process known as budget reconciliation to repeal the Affordable Care Act. (Photo: Pete Marovich/ZUMAPRESS/Newscom)

As budget negotiations begin this week, conservatives in the House of Representatives say they will only support a fiscal blueprint that allows for a full repeal of the Affordable Care Act.

The proposal has sparked some debate within the Republican Party—specifically over an increase to the Pentagon’s overseas contingency operations fund—but House conservatives are united in supporting budget instructions that would repeal the Affordable Care Act through reconciliation.

“The reconciliation language will be a motivating reason for many of us to lean towards supporting the budget,” Rep. Jim Jordan, R-Ohio, said today at the monthly event Conversations with Conservatives. “I want to see the final product, but I think I’ve voted for every budget we’ve had with maybe one exception. … It looks like the language is moving in a pretty good direction relative to reconciliation.”

In examining the budget, Jordan pointed to three specific components that would hinge on him voting “yes:” Whether it’s within spending caps implemented in 2011; whether it repeals the Affordable Care Act through reconciliation; and the overall message it projects for the Republican Party. >>> How Does the House Budget Measure Up?

Reconciliation involves the drafting of “instructions” in a budget resolution that calls on House and Senate committees to craft legislation reconciling the law with the budget. When a reconciliation bill is brought before the Senate, it cannot be filibustered, as just 51 votes are needed to advance and pass the legislation.

Republicans had discussed using the tool to pass their response to the Supreme Court’s decision in the case King v. Burwell or as a way to fully repeal the Affordable Care Act.

Rep. Tim Huelskamp, R-Kan., joined Jordan in citing repeal of the health care law through reconciliation as a top concern for him in the GOP’s budget.

“That would provide an opportunity to get something through the Democrats’ likely filibuster in the Senate for this repeal of Obamacare,” he said. “That was a key priority.”

Republicans in both the House and Senate promised voters they would seek a full repeal of the Affordable Care Act when campaigning in November. However, any bill rolling back the law would be vetoed by President Obama.

Regardless of the looming veto threat, Republicans remain steadfast in putting a bill that does just that on Obama’s desk, and they point to reconciliation as the best way to do that.

“The budget has a lot of flowery language in it. But, when it gets down to it, there’s two things that count,” Huelskamp said. “One is what those numbers are in for next year’s discretionary spending and if there are reconciliation instructions. Those two points are what really count.”