A Tale of Two Cubas: Why the Diplomatic Debate Remains Controversial 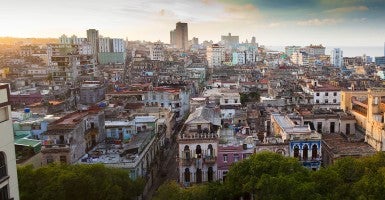 MIAMI—The debate of how the United States should move forward in its relationship with Cuba remains a hot topic — especially in Miami, Fla.

Miami, with its large Cuban population, represents two strong arguments from both sides of the debate—presenting a tale of two Cubas.

In December 2014, President Obama announced measures his administration would take to normalize relations with Cuba. The move came after 18 months of undercover talks between the two countries.

Just a few months ago, Cuba released 53 prisoners in conjunction with the new policy. These advancements mark the most dramatic change in diplomacy since 1961 when an embargo was imposed against Cuba.

First generation Cuban immigrant Carlos Reyes, who opposes Obama’s outreach to Cuba, does not believe the two countries can have a sustainable relationship.

He says the U.S. will simply concede to the wants of the Castro regime without pushing for human rights and better living conditions for Cubans.

“What they [the Cuban government] is looking for is for themselves, not for the Cuban people,” Reyes said in an interview with The Daily Signal.

Reyes came to America in 1957 after working on his family’s farm. He wanted a better life for himself, and from afar over the past five decades, he has wished for his native country to be freed from the grips of Communism.

“Right now, a relationship between the U.S. and Cuba, I don’t see any way it can be done,” Reyes added.

Ricardo Herrero serves as Director of Cuba Now, an organization that promotes policies in the U.S. to end the embargo and renew talks with the communist country.

His mother came to the U.S. as a part of Operation Peter Pan, a movement during the 1960s that sent children out of Cuba to American soil.

Herrero, in an interview with The Daily Signal, says the embargo has proven ineffective and that something new must be done.

>>> US-Funded News Station Wants to Bring Free Press to Cuba. But Raúl Castro Wants to Shut It Down.

“It’s highly emotional when you have to go through the horrors that they experienced 50 years ago when they had their friends and families executed, and their property seized by this government,” Herrero said. “Older Cubans have also come to realize that after 50 years of trying to do things one way and seeing no results, it’s time to do something new.”

Herrero represents a growing movement of people who believe that the Obama administration is doing the right thing by working with Cuba.

Reyes on the other hand, believes the U.S. must remain strong in protecting the Cuban people.

While the debate continues, these two representations of Cuba show the split in how people feel about the changing relations of the two countries.

Jamie Jackson is a former correspondent for The Daily Signal.