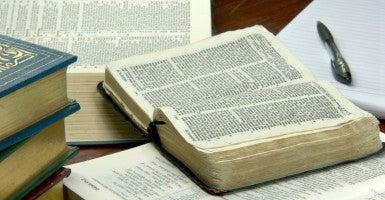 A former Marine and current Navy chaplain has been removed from his unit after sharing the teachings of his faith tradition in private, pastoral settings.

Lt. Cmdr. Wes Modder, a chaplain at the Base Chapel Naval Weapons Station at Joint Base in South Carolina, is an ordained minister with the Assemblies of God.

According to his legal team, a “handful” of individuals complained about his views on issues like atheism, homosexuality and sexual relationships outside of marriage.

According to Military Times, after the complaints, Modder’s commanding officer wrote in a “detachment for cause” letter that states Modder is “unable to function in the diverse and pluralistic environment” of the United States Navy.

His commanding officer has requested that Modder be removed from the promotion list (despite his ranking as “Early Promote,” the highest rating), separated from his unit, and brought before a Board of Inquiry.

The same commanding officer previously wrote in Modder’s fitness report in October of 2014 that Modder was the “best of the best” and recommended him for promotion.

The board could force Modder, who previously served as a Marine in Operations Desert Shield and Desert Storm, out of the Navy. His case is currently under review.

Mike Berry, the senior counsel and director of military affairs at the Liberty Institute, is handing Modder’s case.

In an interview with The Daily Signal, Berry called Modder’s case “unbelievable.”

“He’s a pastor. The unit he serves is his congregation,” said Berry.

Chaplains in the armed service must be specifically endorsed by a particular denomination in order to serve. If a chaplain fails to stay true to the teachings of their faith, their denomination can withdraw their support.

“He’s in a catch-22 between his faith and his career,” said Berry.

Berry said that Modder offered everyone who sought his guidance a “disclaimer” that he was speaking to them as an ordained Christian minister, stressing that Modder offered “spiritual advice” and “Biblical truth” according to his faith tradition in “private” sessions, not merely “unsolicited opinions.”

But after the complaints of a “handful” of individuals, Modder’s future in the Navy is in jeopardy.

“To say that I was blindsided is putting it lightly,” Berry says his client told his legal team.

Modder is also approaching his 20-year anniversary of military service. If his case is not resolved by Sept. 1, his pension and retirement benefits could also be in jeopardy.

Tony Perkins, the president of the Family Research Council, said in a statement that Americans should “demand Chaplain Modder’s reinstatement.”

“If you think chaplains have some of the safest jobs in the military, think again. Men of the cloth are under some of the heaviest fire—and it’s coming from their own side!” said Perkins. “In the Navy, the message is clear: get on board with political correctness or lose your job.”

In a statement to Fox News, the Pentagon said:

“Chaplain Modder has been temporarily assigned to Naval Support Activity Charleston as one of the chaplains on staff. The detachment for cause action will be reviewed by Navy Personnel Command. The senior chaplain remains in place at the Naval Nuclear Power Training Command to provide religious ministry to the students and staff. The Navy values, and protects in policy, the rights of its service members, including chaplains, to practice according to the tenets of their faith and respects the rights of each individual to determine their own religious convictions.”

Sen. Ted Cruz, R-Texas, said in a statement that Modder is being unjustly penalized. “[Modder] is the latest target in a series of assaults on religious liberty in the military and across the nation,” said Cruz.

Modder is highly decorated, and has been praised by his superiors in official documents. Modder was once selected to minister to Navy SEALs.

“For me to be able to serve them is the highest honor,” Modder said in a video released by his legal team.

The Liberty Institute has sought religious accommodation from the Navy in order that Modder may continue to serve according to his faith. The Navy must respond by March 16.