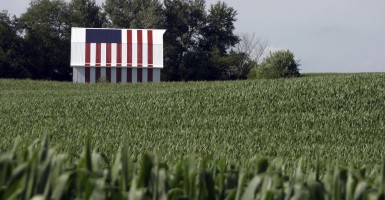 DES MOINES, Iowa—Toward the end of the Iowa Ag Summit, the eighth in a parade of nine likely Republican candidates for president cozied up to the crowd with a salute to the can-do spirit of the American farmer.

“There is no free market in agriculture,” says @DarenBakst

Rick Santorum, former Pennsylvania senator and winner of the 2012 Republican caucuses in Iowa, asked the audience of about 1,000 to consider “all the subsidies and mandates and things we do for the major cities of this country.”

Mass transit and housing subsidies are just two in a host of ways the government helps improve the quality of urban life, Santorum argued.

By contrast, he added, “Most folks out here in rural America are just like: ‘Leave us alone, and give us a shot.’ ”

As with most of the eight other GOP presidential hopefuls to appear on the Ag Summit stage at the Iowa State Fairgrounds, however, Santorum was in no hurry to test that independent streak by proposing to eradicate government involvement in agriculture. In fact, while these nine present and past governors and senators derided unwelcome regulatory actions out of Washington with such words as “top-down,” “overreach” and “dictates,” they described taxpayer-funded price and insurance subsidies as providing “predictability” and “stability.”

When they dictate terms, they invariably mess it up. There’s no way a bureaucrat in a cubicle in Washington, D.C., understands these issues better than the local farmer here in Iowa, or Gov. Terry Branstad.

So when Christie and each succeeding “2016er” sat down for 20 minutes of questions Saturday from Iowa agriculture entrepreneur Bruce Rastetter, who organized the Ag Summit, it was a rare moment that anyone challenged the orthodoxy of what is good government intervention and what is bad.

“There is no free market in agriculture,” Daren Bakst, research fellow in agricultural policy at The Heritage Foundation, told The Daily Signal. “That’s the problem.”

Since before World War II, Bakst said, policymakers from Washington to Des Moines to Sacramento have made it increasingly difficult for national candidates to “remember that the same free-market principles that have allowed this nation to flourish should apply equally to agriculture.” On hand besides Christie and Santorum were Sen. Ted Cruz of Texas, Sen. Lindsey Graham of South Carolina and four former governors—Mike Huckabee of Arkansas, Jeb Bush of Florida, Rick Perry of Texas and George Pataki of New York.

To a man, the presidential hopefuls opposed the idea of government-imposed labeling for genetically modified foods. They argued in similar ways that scientific studies show products made from DNA-altered plants and animals are safe for human consumption.

Cruz took a shot at what he called “anti-science zealots” and the contradictions of the “radical left,” which he said embraces disputed science on global warming yet disregards clear science on food safety.

Likewise, the 2016ers took turns eviscerating the EPA for the intrusiveness of its hotly contested Waters of the United States rules. When finalized, WOTUS could put the environmental agency and the Army Corps of Engineers in control of even the shallowest ditches and drainage ponds.

“Except for some very narrow exceptions, it really is difficult to know what types of waters they couldn’t regulate under their proposed rule,” Bakst said.

However, the White House hopefuls didn’t bad-mouth government programs to rush high-speed Internet access to rural areas. And they found little to fault in taxpayer-backed crop insurance and commodity subsidies to lessen the risk in farming.

Walker, like the others, danced around the offense to conservative principles with observations such as “farming isn’t a business, it’s a way of life.” But that sort of bromide doesn’t appease Bakst.

“Farmers can manage risk as well as other business leaders, yet taxpayers are subsidizing a whopping 63 percent of the premiums that farmers have to pay for crop insurance,” he told The Daily Signal.

The Republican governor, elected to six terms over 32 years, made no bones about his expectation that 2016ers would continue farm-friendly policies in Washington, regardless of whether they fit conservatives’ free-market, limited-government vision for America.

Branstad boiled it down at the podium by exhorting, “Don’t mess with the RFS!”

His reference was to the federal renewable fuel standard and the possibility that President Obama, once a fan, will lessen the amount of corn-based ethanol it mandates be added to the nation’s gasoline. Continuation of the 2007 mandate is where daylight began to separate these nine potential GOP successors to Obama.

Policy analysts such as Bakst argue in particular that the mandate drives up food prices, including the price of corn for human consumption and for animal feed, thus distorting the global fuel supply.

Bush surprised some by saying he envisions ending the biofuel mandate in a decade or so. Walker, previously an opponent of requiring ethanol in gasoline, has switched as a 2016er. He said he will support the mandate until “market access issues” are resolved.

“Eventually,” Walker said, he sees “no need to have a standard.”

“Every gallon of ethanol you can produce here in Iowa is one less gallon you have to buy from people who hate your guts,” he said, spurring applause.

Only Cruz—sponsor of a Senate bill to phase out the renewable fuel standard over five years—flat out underlined his opposition to the mandate and other subsidies as a principled stand. “I support biofuels. I think they have a major role in the energy market,” Cruz told his audience. “But I don’t think Washington should be picking winners and losers. When it comes to energy, we should have an all-of-the-above approach, but it should be driven by the market.”

Perry, farm-raised and onstage next, used similar language in saying he too opposes the mandate.

“I don’t think D.C. should pick winners and losers when it comes to agricultural products,” says @GovernorPerry

“I don’t think you pull it out and discriminate and leave all these other subsidies and mandates in place,” the former Texas governor and agriculture commissioner said. “But I don’t think D.C. should be picking winners and losers when it comes to agricultural products.”

Pataki, who grew up on a farm, owns a cattle farm and used his time with Rastetter to stake out turf on tax reform, declined to hedge.

“I honestly don’t think that the federal government should require anybody in America to buy anything, whether it is ethanol or Obamacare,” the former New York governor said.

Cruz grabbed the attention, though. He looked comfortable gambling that he’d score by affably targeting a cherished agricultural entitlement as a mark of character.

What some hyped as Cruz’s “Sister Souljah moment” nonetheless is the kind of unexpected value that voters look for. That’s the observation of Dan Holler, communications director for Heritage Action for America, the think tank’s lobbying affiliate. Holler told The Daily Signal:

A presidential campaign based on pandering to specific state interests isn’t going to motivate voters. Candidates must move beyond the favoritism of identity and crony politics and focus on promoting an opportunity agenda that works for all Americans.

The 2016ers generally, including Bush and Walker, were more willing to say a tax credit to encourage development of wind power had served its purpose. It could be phased out as long as—in Santorum’s words—the measure didn’t “just go away” and upend “predictability.”

To the extent anyone offered specifics, the Ag Summit revealed a divide between Bush and Graham on one side (pro) and Cruz and Walker on the other (con) on whether to grant amnesty to illegal immigrants.

But no one questioned the need to supply the agriculture industry with affordable workers, many of them currently illegal immigrants, by creating what most described as a common-sense program to welcome guest workers.

On other topics, the 2016ers appeared united in preferring that industry leaders voluntarily address concerns raised by consumers, environmentalists and animal rights activists, or help fashion state-based solutions, rather than be told what to do by Washington.

Free trade did not prove to be a contentious topic, although the meaning of fair trade likely differed for those in the crowd seeking new markets.

All but Huckabee voiced little objection to revving up the president’s so-called trade promotion authority to fast-track key pacts with other nations, so long as Congress has the final word on accountability.

However, none of the nine prospective candidates for the Republican nomination supported Obama’s move to open trade with Cuba unless its communist regime began to protect citizens’ basic freedoms and rights.

“My parents corrected my bad behavior, they didn’t reward me with ice cream and candy,” said Huckabee, winner of the 2008 Iowa caucus, calling for more “pressure” on Iran as well as Cuba.

Rastetter ran through the same basic industry concerns with each candidate seated beside him, but those who got too windy ran out of time without addressing them all.

Christie often was the most succinct in demonstrating familiarity and agreement with industry priorities.

The New Jersey governor provoked laughter and applause with a light touch for a couple of hecklers from his state: “My people follow me everywhere, Bruce,” he told his interviewer. “I’m magnetic.”

Coming months will test the willingness of Cruz and Perry, two of the more conservative hopefuls, to keep including farmers in their talk about the need for government to stop picking winners and losers. For now, Ag Summit host Rastetter told The Daily Signal that he is thankful the participants took the time to “address issues that are important to rural America.”

The discussion is about “where the agriculture sector can or should be headed to meet the ever-increasing demands to feed, clothe and fuel the world’s growing population,” Rastetter spokesman Eric Woolson said.

Bakst argues that it’s time to frame the challenges without reliance on Washington.

“Agriculture has been subject to the same central planning philosophy that has existed for more than 80 years,” he said, adding:

It will take leaders willing to get the federal government out of the way so that farmers and ranchers can better use their expertise to provide food that feeds this nation and the world.

Some other things the nine had to say at the Ag Summit:

"A country that doesn't have secure borders is not really a country anymore."-@GovMikeHuckabee #AgSummit pic.twitter.com/zFW1Tm2qh6

"I will do what I say I will do, and I will tell the truth."-@SenTedCruz #AgSummit pic.twitter.com/sLR2H9T48K