Progressives, Including Obama, Misunderstand What Being a Nation of Immigrants Means 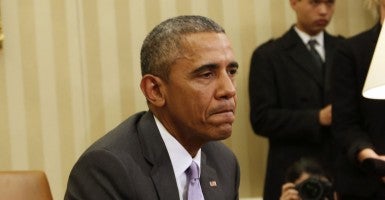 Recently, President Obama has trotted out a new line regarding his executive action on immigration: It’s supported not just by the law but by something more majestic…history!

In Florida, he confidently repeated the point to MSNBC host Jose Diaz-Balart: “We’re going to be as aggressive as we can, because not only do we know that the law’s on our side, but history is also on our side.”

As sweeping statements go, that one’s almost Mosaic in its reach. On the legal issue, he’s got a quarrel with the courts, the American people—who disagree with the way he’s gone about things—and, until this week, Congress. But what about his claim of history’s blessing?

History Does Not Encourage Grievance Groups

The president’s claim that predecessors have used similar executive action to grant exemption to millions has no historical precedent. But he means something more: The long arc of American history points to a nation that is increasingly “diverse” and such “multiculturalism” will render these questions moot. President Obama clearly had this in mind when he professorially averred to Diaz-Balart:

This idea that American history smiles not just on his immigration actions but on his vision of how immigrants will shape America is more contentious.

There’s no denying that the history of the last three or four decades has demonstrated a worrying slide into the type of “multiculturalism” President Obama and other progressives favor. Yes, the end of assimilation into American civic culture would produce an electorate that, over time, would favor big-government progressives.

But the 239-year history of the country—or the four centuries, depending on how expansive you want to be—does not endorse the republic that progressives envision, one where a President Rodriguez or President Chen would think in terms limited by the parameters of their particular ethnic group and would advance the narrow interests of that group to the detriment of the nation.

That is how nativists used to smear immigrant groups, and it almost kept John F. Kennedy from the presidency.

The Founders and their ideological descendants—John Quincy Adams, Andrew Jackson, Abraham Lincoln, Teddy Roosevelt—rejected the slander that successive waves of immigrants were unassimilable. They were copiously on record as seeing American values being applicable to all, not just those with English DNA. They thought such inclusion was indispensable in a country with individual rights and a tradition of voluntary group association that requires a high-trust public square. They thought division into permanent ethnolinguistic castes was anathema to those values.

The Founders and their descendants proselytized through schools, private companies, clubs, and other voluntary associations that America’s civic culture—self-improvement through hard work, the uniquely American volunteer ethos, the idea that government regards all as equal and favors no group—was applicable to all who came to live here.

Today’s multiculturalists perversely have borrowed much of nativists’ thinking; their view that assimilation is a form of oppression is related to seeing some groups as unassimilable. They believe that particular groups have special insights (thus a “wise Latina” is needed on the Supreme Court) and that certain groups deserve protection and ethnic preferences.

The president, who’s on record as seeking “the fundamental transformation of the United States of America,” favors the trend that has been underway since the 1970s, the reversal of the Founder’s Republic. He believes he’s found in immigrant communities the numbers he needs electorally to put the Progressive ideal over the top and accomplish regime change—in the country he leads.

The Truly Inclusive View of Immigration

But given the previous history, it isn’t foreordained that multiculturalism will triumph. The idea that America’s values transcend the circumstance of one’s birth remains very much alive. That is, in fact, the truly inclusive view; immigrants and their descendants may like it if they heard it.

All it requires is for politicians—be they Republicans or Democrats—to be vocal and smart in preserving the way of life that attracted immigrants here in the first place. They can start by refusing to fall into the trap of discussing illegal immigration first, second, and third.

That is what President Obama wants. As he told Diaz-Balart, “When they start asking for votes, the first question should be, do you really intend to deport 11 million people?”

Whatever their view, inclusive politicians should answer the illegal immigration question with frankness and empathy, and move on. They then should address immigrants and their descendants on how to make them upwardly mobile through access to better education and jobs—and full members of the American civic culture, not of a subculture.

Progressives, including this president, fundamentally misunderstand what being a nation of immigrants actually entails. A future president with a Spanish or Asian surname might not mimic Obama’s ideal of Presidents Rodriguez or Chen.

And, no, history is not over.