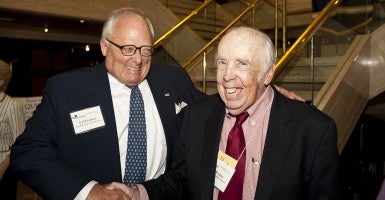 At last year’s CPAC Reagan banquet, Stan Evans regaled attendees with tales of the early days of the American Conservative Union. His remarks—oh so accurate, oh so funny, and preserved for posterity on YouTube—conveyed important history lessons.

It was typical Stan Evans—communicate serious and important information in a way that kept everyone’s attention and kept them laughing.

At last week’s CPAC meeting, many people were still talking about the presentation. But Stan Evans will address the crowds no more. He died earlier this week at the age of 80.

I first met Stan in 1973 when, as chairman of the ACU, he gave me my first “conservative movement” job. Stan didn’t live in the Washington, D.C., area then, but he visited often to help other leaders of the modern conservative movement prepare their first serious policy assault on Congress and the White House.

The young movement of which Stan was a founder had already made significant advances. Jesse Helms, newly elected to the Senate from North Carolina, promised to put the upper chamber on record on issues important to the movement: forced busing, balancing the budget, right to prayer in schools, the giveaway of the Panama Canal, and standing against communist aggression around the world.

Leading a similar crusade in the House were Republican Reps. John Ashbrook of Ohio (a former ACU chairman) and Phil Crane of Illinois (who would succeed Stan as ACU chairman). On the West Coast, Ronald Reagan, then in his second term as governor of California, had emerged as a visible and vocal leader for these same conservative values.

In fall 1973, Stan and his merry band at ACU, led by executive director Ron Dear, organized a leadership meeting to strategize on next steps. National Review, Human Events, Young Americans for Freedom, Phyllis Schlafly and other conservative powerhouses came together at this meeting. They recognized that it was a pivotal moment for the nation’s growing conservative movement, that it needed a focal point to energize a new advance for conservative principles and values.

The notion of a Conservative Political Action Conference came out of that meeting. Led by Stan Evans, CPAC was launched in early 1974 to bring conservatives together, provide the material they needed to understand the issues of the day, and motivate them to act in the best interests of ordered liberty in their own communities. Stan was in the middle of all this activity—writing, speaking, energizing conservatives everywhere and, it seemed, all the time.

It was on Stan’s watch at ACU that state organizations assembled by conservatives to proclaim conservative principles took root and flowered. These organizations gave visibility to conservative ideas and held state legislators accountable, much as the ACU ratings were designed to hold federal lawmakers accountable. The ACU staff helped make it all happen with counsel, financial resources and, most importantly, a cheerleading, entertaining, provocative and motivational educator and activist named Stan Evans.

Stan crisscrossed the country from Maine to Florida to California, Oregon and Washington State with many stops in mid-America. When the dust settled, he had helped launch some 35 state conservative unions, which soon would be asked to provide the manpower for Ronald Reagan’s 1976 campaign against an incumbent president. Stan spoke at their events, offered counsel to their boards, regaled them with stories late into the night, all to build solidarity and make the fight for liberty serious, exhilarating and fun.

Stan eventually relocated to Washington, D.C., where he spent many an evening surrounded by young conservatives who loved his rock ‘n’ roll records almost as much as he did—and loved his conversation even more. Stan just naturally made people laugh. He had a way of making everyone in his presence pay attention to what he was saying just by the way he said it. And while your sides were splitting with laughter, you were thinking about what he was saying.

Stan also imparted a love for great books and introduced many a young conservative to works that had somehow not made it into their college curriculum. His great book, “The Theme is Freedom” should be on the shelf of every person who loves freedom.

Many of today’s conservative leaders owe much to the lessons, the leadership, the energy and yes, the humor of M. Stanton Evans. The good Lord blessed Stan with many gifts, which he, in turn, shared with us. And for that we are most thankful.