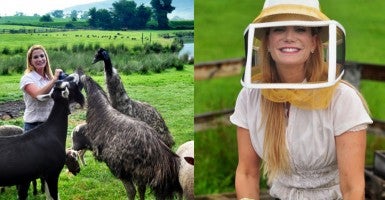 Instead of filing the same version of the conservation easement that was signed by its president and a Virginia farmer, the Piedmont Environmental Council pulled a “bait and switch” that dramatically altered the document’s terms and conditions.

That’s one of several revelations that have come to light in the past few days as Martha Boneta, the owner of Liberty Farm in Fauquier County, Va., prepares to initiate a new round of litigation against Piedmont Environmental Council, a non-profit land trust.

Boneta refiled a lawsuit Wednesday in Fauquier County Circuit Court that says the environmental group colluded with realtors and government officials to issue zoning citations against her property. This was done to force Boneta into selling her farm, she alleges in the suit.

Boneta also is considering filing a second lawsuit at the federal level against Piedmont Environmental Council.

That suit would be based on the Racketeer Influenced and Corrupt Organization Act, commonly known as RICO.

The environmental group’s inspectors and officers have overstepped their authority under the easement to the point where they have trespassed across Liberty Farm and interfered with her farming activities, Boneta alleges.

Moreover, an analysis of the discrepancies that exist between the documents underpinning the easements shows that it may be “invalid,” and “unenforceable,” she says.

But on July 26, 2006, the Piedmont Environmental Council filed the alternative easement with Fauquier County officials, without Boneta’s consent, just prior to transferring the title of the property over to her. The new agreement provides the green group with rights and privileges not in the version Boneta agreed to when she purchased the farm.

New evidence has emerged that appears to debunk a historical designation the Piedmont Environmental Council makes in both the signed and filed versions of the easement that says Thomas “Stonewall” Jackson, the confederate Civil War general, encamped on Boneta’s property on the evening of July 18, 1861.

Historical accounts of Jackson’s movements in and around the Paris, Va. section of Fauquier County at that time place the encampment at another location.

Oddly enough, the Piedmont Environmental Council makes a similar historical claim about Jackson’s whereabouts in the easement documents it has associated with Ovoka Farm, also located in Paris, but on a separate parcel of land from Liberty Farm.

The general couldn’t have been in both places at the same time.

Boneta has provided The Daily Signal with an “Analysis and Assessment of Damages” — prepared by an economist she hired — that details the losses she incurred as a result of the altercations and discrepancies in the easement documents.

The analysis shows that the historical claim made about the Jackson encampment inflated the real estate price of Liberty Farm well beyond its actual value.

Boneta paid $425,000 for the property in 2006. Over a two-year period, she was forced to fence off about 18 acres of the Oak Grove section of the farm — where the Piedmont Environmental Council located the Jackson encampment — which meant she could not farm in this area.

“What the PEC has done is unethical and a breach of contract,” Boneta told The Daily Signal in an interview. “If they can do this to me and my family, what else have they done? We are shocked to learn that a non-profit 501(c )(3) that is supposed to operate in the public interest would commit this kind of an act.”

“What the PEC has done is unethical and a breach of contract,” says Martha Boneta, a Virginia farmer.

The idea behind conservation easements is for property owners to receive tax breaks in exchange for agreeing to restrict future development on a portion of their property. The Boneta easement lists the Piedmont Environmental Council and the Virginia Outdoors Foundation as co-holders.

The environmental council has not responded to recent inquiries from The Daily Signal seeking comment, but it has presented the public with an online post that provides details of its history with the property and the differences it has with Boneta.

What Boneta describes as a “bait and switch” between the signed easement and the easement filed with the county government further complicates the ongoing legal standoff as there are substantial differences between the two documents. In fact, entire sections were added to the filed version of the easement without Boneta’s consent, according to the “Analysis and Assessment” paper.

These new revelations could serve as the basis for the federal lawsuit Boneta expects to file on top of the suit that has been reactivated at the state circuit court level.

“The only reason why the lawsuit was withdrawn at all was to give an opportunity for mediation,” Boneta explained.

“The PEC has not taken responsibility for the horrendous bad acts and damage they have done. We have no choice than to re-file the existing lawsuit as well as additional lawsuits and claims.”