What Patricia Arquette Got Wrong About the Founders and Women 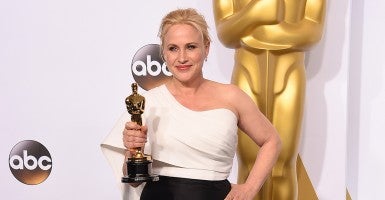 In a harried Oscar acceptance speech which culminated in a hackneyed call for wage equality, actress Patricia Arquette blamed the Founders for the so-called gender pay gap.

If the Framers didn’t intend the Constitution for women, they sure did a fine job of concealing their intention. Nowhere in the original Constitution are citizens classified according to sex. As Tiffany Jones Miller explains in the “Heritage Guide to The Constitution” essay on the 19th Amendment:

Contrary to popular belief, the United States Constitution of 1787 is a gender-neutral document. Throughout the original text, the Framers refer to “persons”—as opposed to “male persons”—and use the pronoun “he” only in the generic sense. The word “male” did not even appear in the Constitution until the Fourteenth Amendment was ratified in 1868.

While we’re at it, it’s worth pointing out that the Declaration of Independence also doesn’t take into account sex in proclaiming that we are all created equal and endowed by our Creator with inalienable rights. The Declaration speaks of “all men” and not “all human beings” because the former is a more rhetorically powerful way to describe mankind.

Women were voting in New Jersey at the time of the Founding! For the first time in recorded history, women voted alongside men in elections.

Neither one of our founding documents classifies people according to sex—or according to race or religion for that matter. Therefore, contrary to what many civics textbooks incorrectly teach, the original Constitution did not restrict the right to vote to white, property-owning males aged 21 or older.

The Constitution defers to the states on voting eligibility in federal elections. As is plainly written in Article I, Section 2: “the Electors in each State shall have the Qualifications requisite for Electors of the most numerous Branch of the State Legislature.”

As a result, voting eligibility varied by state. Certain states denied blacks the right to vote—but a majority did not. And—here comes the whopper—women were voting in New Jersey at the time of the Founding! For the first time in recorded history, women voted alongside men in elections. And it happened right here in America—the first country in the world dedicated to the proposition that all men and women are created equal.

Whatever the state of remuneration in the workplace may be today, Patricia Arquette and others should leave the Founders out of it.