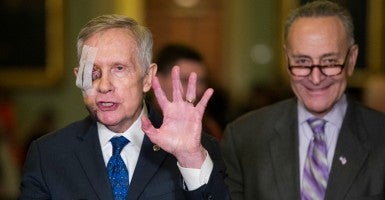 Allow funding for the Department of Homeland Security to lapse or engage in the legislative process.

Those are the only two options Senate Democrats have at this point. Everything else transcribed in the press or recited by television pundits is nothing more than a distraction. Senate Democrats, of course, deny that binary choice, but their denials are only accepted by those who can’t — or won’t — understand the wonderfully complex rules of the United States Senate.

Before diving into the process, it is worth taking a minute to understand the politics.

Obama and Senate Democrats are trying to give illegal immigrants a $24,000 check while border patrol agents will have their paychecks withheld.

The implication of the Democrat-led filibuster is that Homeland Security funding will lapse and our nation’s border patrol agents will have their paychecks withheld after Feb. 27. While those fine men and women continue to work without pay, the Department of Homeland Security will be preparing to grant legal status and work permits to those who are in the country illegally. To make matters worse, some of these individuals will use their newly issued Social Security numbers to claim four years’ worth of tax credits.

For those looking for a 30-second campaign ad, this is political gold: President Obama and Senate Democrats are trying to give illegal immigrants a $24,000 check while border patrol agents will have their paychecks withheld. It also has the added benefit of being true.

Democrats have zero procedural options for moving off the current motion to proceed to the House-passed Homeland Security funding bill. They have just two options: 1) continue blocking consideration of the bill; or 2) agree to the motion to proceed and begin the promised amendment process.

Here again Democrats say, no, that isn’t true. They have a bill to pay border patrol agents and allow illegal immigrants to collect their amnesty bonus. Setting aside the obvious policy concerns, their solution runs into two problems. First, as mentioned previously, they cannot simply call up their bill. Second, as a standalone measure that bill is unconstitutional.

The Constitution is quite clear on this point. So clear that even Senate Minority Leader Harry Reid (D-Nev.) understands — or understood. In 2007 he declared, “Everyone knows, even in elementary school, that under our Constitution revenue bills must originate in the House of Representatives.”

If Senate Democrats believe their alternative can prevail, they should vote to proceed to the House-passed bill and offer it as an amendment. There simply is no other way, no matter what anyone else suggests. Left unsaid by most is that Democrats are well aware they would lose a vote on their amendment, so they are hiding behind procedural hurdles.

There is likely to be some temptation to avoid this fight now that a Fifth Circuit judge has issued an injunction and the administration announced it would halt implementation of the president’s amnesty. While Obama’s actions are clearly unconstitutional, conservatives have little reason to trust the courts to make the right decision. What’s more, the administration said they will prevail in court and begin implementing and expanding the amnesty program.

Even with the stunning news out of Texas, Democrats have just two options. They can deny paychecks to border patrol agents or they can engage in the legislative process. It is that simple.