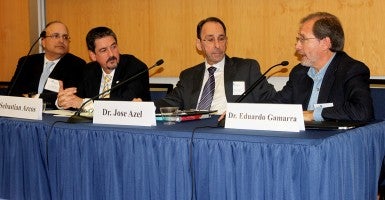 MIAMI—When Sebastian Arcos steps back to evaluate President Obama’s move to normalize relations with Cuba, he tries to forget his own experiences with the Castro regime.

But it’s difficult for Arcos to have a clean perspective because the Cuban government’s imprints are all over his life—he spent a year in prison, and was kicked out of school, for trying to escape repression.

“My experiences have everything to do with the way I feel about it,” said Arcos, now the associate director of the Cuban Research Institute.

“I feel like I have a better grasp of the nature of the regime than the people changing the policy. They don’t know Cuba the way I do. They can look at it more objectively.”

Arcos was one of four experts on Cuba to speak at Florida International University last week at an event hosted by The Heritage Foundation. Their diverging opinions on Obama’s effort to engage Cuba, in some ways framed by their personal experiences, reflects a larger divide on the policy shift.

Ever since Obama announced a policy change that opens up the communist-ruled island to expanded U.S. travel, trade and financial activities—and restores diplomatic relations—public opinion on the move has been mixed.

The divide is especially true among Cuban-Americans, whose opinions reveal a generational split.

A survey of Americans with Cuban heritage conducted by Bendixen & Amandi International found that 44 percent agreed with “Obama’s announcement to begin normalizing relations with Cuba,” while 48 percent disagreed.

The survey, sponsored by El Nuevo Herald, the Miami Herald and the Tampa Bay Times, showed that 64 percent of U.S.-born Cubans support Obama’s policy and 53 percent of Cuban immigrants opposed it.

Take One: ‘Messing With Cuba’

Arcos, 53, who spent the first 30 years of his life in Cuba before coming to Miami, takes Obama’s policy shift personally.

“I am an American now,” Arcos told The Daily Signal in an interview after the panel. “My children are American. But my priority is also Cuba. When the president is messing with Cuba, he is messing with my two countries in the world.”

Arcos’ passion for human rights, and his future life path, was molded in captivity.

While he was in prison—sent there when he was 20 years old for trying to escape Cuba to Miami on a boat—Arcos acquired a thirst for political activism.

Through fellow inmates, he learned about the Cuban Committee for Human Rights, and after his release from prison, Arcos joined the group, which was the first such committee on the island.

Before he was kicked out of the University of Havana—forced out because of his criminal record—Arcos wanted to be a marine biologist.

Such ambition has limited potential in Cuba.

Arcos spent his early working years employed by the state, as a breeder of tropical fish for export.

That work did leave some legacy. Arcos takes meticulous care of the many fish tanks in his Miami home.

“I am quite proud of my fish tanks,” Arcos said.

But today, and ever since relocating his dreams to the United States, Arcos pursues a different passion: international politics.

In this new life, Arcos holds a nuanced position on Cuba’s future.

“I understand that the old policy [the 54-year-old trade embargo against Cuba] was not getting us anywhere,” Arcos said. “But the policy is unfairly criticized. It was not created for regime change, but it has been judged as if it was. I am OK with opening up diplomatic relations. The benefits are more than the costs. But not in the way it was done. You have to talk to your enemies, but you don’t have to give your enemies everything.”

Though Obama has the right idea, Arcos argues the president’s approach is wrong.

“Their approach is ideological,” Arcos said. “Obama is doing this because he believes U.S. policy is the reason Cuba is the way it is. The new policy permits the flow of more resources. But the government controls most of the private sector. The Cuban elite will be stronger under this policy.”

Acros added: “My fear is that the change in policy will make the transition to democracy (after Raúl Castro retires in 2018) more difficult. I could be wrong.”

Azel, a scholar at the University of Miami’s Institute for Cuban and Cuban American Studies, believes that engaging the island—and the people who live there—will not necessarily lead to political change.

“The Cuban government controls 80 percent of the economy,” said Azel, who was a panelist at the Heritage event. “This policy by definition will strengthen the regime. How exactly does strengthening that regime lead to political change? We are now saying it is OK to be a dictatorship. You can repress people and it’s OK with the U.S. I don’t see a path how that leads to political change.”

Dr. Frank Mora, a Miami-born Cuban American political scientist and a panelist at the Heritage event, contends that the United States’ prior policy of “embargoes and sanctions” against Cuba will never work.

“Whatever engagement has been in the past, it’s about time we decide on an agenda besides hiding behind isolation and estrangement,” said Mora, a Cuba scholar at Florida International University and a former deputy assistant secretary of defense for the Western Hemisphere in the Obama administration.

He says that it’s wrong to view Obama’s policy shift as an endorsement of the Castro regime.

“This is not about the Cuban government,” Mora said. “This is about finding ways to engage Cuban society. What are Cubans going to do [with it]?”

He also says it’s incorrect to view the move as a deal between two parties: Obama and Castro.

“This was not a negotiation,” Mora said. “In was in fact, a unilateral decision. We didn’t want anything in return.”

Dr. Eduardo Gamarra, a Bolivian-American professor at Florida International University and a panelist at the Heritage event, defended Obama’s ability to act alone in easing the embargo.

Only Congress can fully lift the embargo.

“Obama is simply carrying out his mandate,” said Gamarra, noting that before he became president, Obama had promised to liberalize relations with Cuba. “That is what democracy is all about.”

He noted that Latin American leaders across the spectrum welcomed the changes, from hard-line leftists in Venezuela to more pro-American countries such as Mexico and Colombia.

As part of its policy shift, the Obama administration has said it will press Cuba to improve human rights.

While critics doubt the Castro regime’s willingness to appease the Americans on human rights, Mora believes the United States is smart to try.

“We have to continue to pressure human rights,” Mora said. “The administration has done that. We can do both of those things. We can have normal relations and continue to insist on human rights and democracy, like we do so many other countries.”

Though the experts disagree on what the result of Obama’s policy change will look like, they all care deeply about Cuba’s future—and understand its significance to America.

“I have spent the happiest years of my life in America,” Arcos said. “My parents sacrificed everything for me to be here. I owe them this. I owe them to hope for the best future for Cuba.”