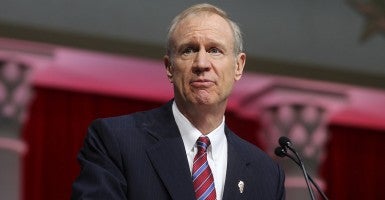 Go big or go home. That must be newly elected Illinois Gov. Bruce Rauner’s motto. A week ago the Republican governor announced his support for local right-to-work zones.

Then on Monday, he signed an executive order making union dues voluntary for state government employees. He also filed a preemptive legal challenge that could make it to the Supreme Court.

Unfortunately these benefits have crippled the states’ finances. Illinois has the most underfunded pension system in the entire country. Bloomberg estimates Illinois has set aside less than two-fifths of the money necessary to pay its pension obligations.

Taxpayers foot this bill for this generosity. Illinois already has the second-highest property taxes in America. In 2011, the legislature increased state income tax rates by two-thirds and business taxes by nearly half to pay for government union benefits.

Government unions organized rallies outside the state capitol in support of the tax hikes. Government employees chanted “Give up the bucks!” and “Raise my taxes!” Even those tax hikes did not stabilize the states’ pension finances. Mandatory union dues forced government employees who personally oppose these policies to financially support them nonetheless.

Rauner’s executive order puts an end to this – for state employees at least. As Rauner told reporters:

Forced union dues are a critical cog in the corrupt bargain that is crushing taxpayers. Government union bargaining and government union political activity are inexorably linked. An employee who is forced to pay unfair share dues is being forced to fund political activity with which they disagree. That is a clear violation of First Amendment rights — and something that, as governor, I am duty-bound to correct.

Rauner also filed suit asking federal district court to affirm the constitutionality of this executive order. There is a good chance the courts will — the Supreme Court has already expressed serious skepticism about the constitutionality of such compelled union speech and association. If so, Illinois taxpayers and state employees would win a big victory.