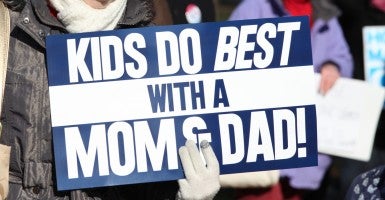 In an open letter to Justice Anthony Kennedy, the daughter of a same-sex couple writes that the Supreme Court should “protect marriage.”

Katy Faust, who serves on the Academic and Testimonial Councils of the International Children’s Rights Institute, writes that the interests of children are best protected by preserving marriage as a union between one man and one woman.

“It’s very difficult to speak about this subject, because I love my mom,” writes Faust. “Most of us children with gay parents do. We also love their partner(s). You don’t hear much from us because, as far as the media are concerned, it’s impossible that we could both love our gay parent(s) and oppose gay marriage. Many are of the opinion I should not exist. But I do, and I’m not the only one.”

Faust writes that gay and lesbian individuals are equal in dignity to straight individuals: “There is no difference between the value and worth of heterosexual and homosexual persons. We all deserve equal protection and opportunity in academe, housing, employment, and medical care, because we are all humans created in the image of God.”

A same-sex marriage can lead to heartbreak for the children involved, argues Faust, as it is inevitable that not only will they be separated from at least one of their biological parents but will “miss out on at least one critical parental relationship and a vital dual-gender influence.”

She said legitimizing same-sex marriages places the “desires of adults” over “the rights of the child.”

Children, she argues, are “the reason government has any stake in this discussion at all.”

“Making policy that intentionally deprives children of their fundamental rights is something that we should not endorse, incentivize, or promote,” Faust writes.

Her own marriage and resulting family, she said, made her realize that her children deserve both a mother and a father:

Now that I am a parent, I see clearly the beautiful differences my husband and I bring to our family. I see the wholeness and health that my children receive because they have both of their parents living with and loving them. I see how important the role of their father is and how irreplaceable I am as their mother.

She asks Kennedy to remember that children “deserve all the physical, social, and emotional benefits of being raised by their mother and father as well.”