Harry Jaffa and the Most Controversial Speech in Political Convention History 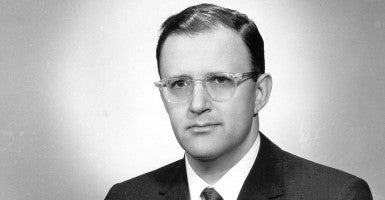 In academe, the late Harry Jaffa of Claremont McKenna College was most famous for his groundbreaking scholarship on the Declaration of Independence and Abraham Lincoln, whom he revered. He also was well-known for his short temper and the long letters he wrote in which he eviscerated anyone who disagreed with him that the Declaration and the idea of “equality” must be placed at the very center of the American Experiment.

Yet, in the world of electoral politics, Harry Jaffa is best known as the author of the most controversial speech in political convention history—Barry Goldwater’s acceptance of the 1964 Republican presidential nomination in which he declared, defiantly, “Extremism in the defense of liberty is no vice.”

It so happens I was in San Francisco, as director of information for the Goldwater for President Committee, and witnessed at least part of the writing of that speech. It was Tuesday afternoon, July 14, and I had to speak with campaign director Denison Kitchel about an urgent matter (everything is “urgent” at a national convention). I knocked on the door of the presidential suite on the 17th floor of the Mark Hopkins Hotel and was admitted.

There seated in his shirt-sleeves and loosened tie was Goldwater, surrounded by Kitchel; Bill Baroody, the president of the American Enterprise Institute on leave; Professor Warren Nutter of the University of Virginia; Richard Ware, the president of Earhart Foundation; and Jaffa, then a professor of political science at Ohio State University. As Baroody read aloud each line I could see heads nodding in agreement. I was not present when they came to the trenchant line about extremism.

Acceptance speeches are not usually written this way, but Barry Goldwater was not your usual candidate. Three days earlier, he and his top advisers had been discussing a draft written by Karl Hess, the senator’s usual speechwriter, which had generated little enthusiasm.

When Pennsylvania Gov. William Scranton, who was fruitlessly challenging Goldwater for the nomination, circulated a scurrilous letter to all the delegates describing “Goldwaterism” as a collection of “absurd and dangerous positions” and Goldwater himself as the leader of radical extremists, Goldwater threw away the Hess draft. He decided to focus on one major point: The conservative movement aimed to take the country in a new direction toward less, not more, government. At the same time, it seemed “politically illogical and personally contradictory” to Goldwater to offer any olive branches to Rockefeller, Scranton and the other liberals after they had called him every dirty name in politics. He wanted to make it clear that conservatives were taking over the party and setting a new political course for the GOP.

Goldwater had been impressed by a memorandum on extremism that Jaffa had written for Rep. John Rhodes of Arizona for the platform hearings. He turned to the political scientist who had been educated at Yale and The New School for Social Research and asked him to write his acceptance address. Athough he had never written a political speech, let alone one as consequential as this, Jaffa, never lacking in self-confidence, agreed.

Along with Nutter, who taught economics at the University of Virginia and would later serve in President Reagan’s Department of Defense, Jaffa worked through the night and early Monday morning on a draft. Jaffa, Nutter and Baroody, acting as editor, continued to write and rewrite during the next two days. Goldwater was often present, listening carefully and occasionally making a suggestion.

Jaffa personally wrote the famous lines: “I would remind you that extremism in the defense of liberty is no vice! And let me remind you also that moderation in the pursuit of justice is no virtue!”

At any other national convention, those words might have been uttered and then forgotten. But “extremism” had come to have a special meaning for every delegate, conservative or liberal. For Rockefeller and the liberals, it was a scarlet word to be sewn on the breast of every conservative in the Republican Party. For Goldwater and the conservatives, it was a badge of honor to be worn proudly. Goldwater wanted to turn his detractors’ favorite epithet back on them. Jaffa was able to provide a sound rationale for the word’s use.

In “The Rights of Man,” published in 1791, Thomas Paine writes, “A thing moderately good is not so good as it ought to be. Moderation in temper is always a virtue; but moderation in principle is always a vice.” As Jaffa explained, Paine was rendering a major point of Aristotle’s “Nicomachean Ethics” that every virtue is a mean between two vices. For example, the virtue of courage is the mean between foolhardiness and cowardice.

Other prominent Americans who counseled extremism through the years included Patrick Henry, who vowed, “Give me liberty or give me death;” Abraham Lincoln, who in his famous “House Divided” speech in 1858 said that “this government cannot endure permanently half slave and half free …. It will become all one thing or all the other;” and John F. Kennedy, who is his 1961 inaugural address said, “Let every nation know … that we shall pay any price, bear any burden, meet any hardship, support any friend, oppose any foe, to assure the survival and the success of liberty.”

Goldwater provided no such context in his acceptance address, and many in the news media suggested that his words were a call to extreme action by conservatives in the fall election. Ironically it was Goldwater’s opponents who were guilty of extremism, starting with King, who said that if Goldwater were elected the nation would erupt into “violence and riots, the like of which we have never seen before.” As we know, it was King’s murder four years later that precipitated unprecedented violence and riots across the country.

Unfortunately for Goldwater, there were no spin doctors in 1964—no one to declare Goldwater’s speech was one of the most brilliant in convention history, to draw attention to its Lincolnian and Churchillian accents, to place the extremism line in perspective with references to Aristotle, Paine, Henry and King, to emphasize its theme of freedom at home and abroad. It was then the custom that the politician proposed, and the media disposed.

Goldwater always stood by his assertion that “extremism in the defense of liberty is no vice,” telling me 30 years later, “I’d make that speech again any place, any time—I think it’s the best statement I ever made.” And yet he never again used the words in his 1964 presidential campaign. As for Harry Jaffa, he rested content, telling one and all who ever asked him that it was the “first, last and only” political speech he ever wrote.