Just Like They Did With the Stimulus, the Obama Administration Is Again Assuming a Rosy Economic Future 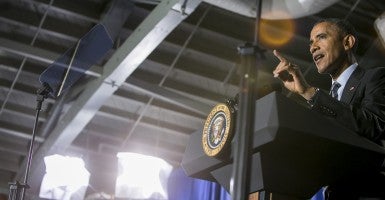 President Barack Obama delivers remarks on the FY2016 budget at the Department of Homeland Security on Feb.2, 2015. (Photo: Kristoffer Tripplaar/Newscom)

The fact that economic projections will inevitably miss the mark to some degree or another does not render them useless. Just because investors cannot perfectly predict future stock prices does not mean they shouldn’t examine companies’ fundamentals and make informed investment choices.

Likewise, the federal government should use all available resources to generate informed estimates for the future path of the economy. After all, a lot is riding on the economy. Economic growth has a huge effect on tax revenues and government spending, and on a personal level, it impacts job opportunities, wages and prices.

Unfortunately, the administration appears to be, once again, forecasting rosy economic assumptions—as opposed to less optimistic economic assumptions such as those of the Congressional Budget Office—so that the damaging impacts of the president’s big-government policies won’t appear quite so bad.

Compared to the Congressional Budget Office’s projections for the 2016-2025 period, the president’s budget assumes:

It’s time for the administration to stop hiding behind overly-optimistic economic projections and instead recognize the toll that big-government and big-spending policies have taken on the still-recovering economy.