Activist Blames Cuban Government for Her Father’s Death. Now, She Wants to Make the Island Free in His Memory. 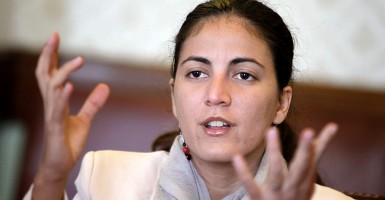 Living out the legacy of her late father, Rosa María Payá pushes for democracy in Cuba. Photo: Ivan Franco/Newscom

More than two years after her father died in a controversial car crash, Rosa María Payá is still searching for answers.

She also continues to fight for the freedom of Cuba—the same fight that her father, the democracy leader Oswaldo Payá, did not die in vain for.

Rosa María’s fight took on an uncertain and new turn when President Obama and Cuban leader Raul Castro announced a deal last month to normalize relations between the two countries.

During a recent visit to Washington, D.C., Rosa María spoke exclusively to The Daily Signal about the change, declining to say if she supports it.

Despite her uncertainty about the Obama-Castro deal, Rosa Maria does have expectations for what mended U.S.-Cuba relations should look like. One of the main things she wants to see is justice.

“If the two governments decided to start to talking openly and in public about the future of my island, we need to put forth some important demands,” Rosa María Payá says.

“The first demand Cubans want to have for themselves is the demand to have free and fair elections. For more than 62 years, Cubans have had no participation in free, competitive, and just elections.”

“I am also hoping for the end of impunity. I am hoping that the investigation of the death of my father should be in that conversation with the Cuban government—the demand of the truth.”

“He believed deeply in the capacity of the Cuban people to decide and to build a future of prosperity and happiness for all of us,” @RosaMariaPaya says of her late father.

During Obama’s State of the Union address last month, Rosa María got first-hand exposure to the president’s vision for future U.S.-Cuba relations when she sat and watched as a guest of Sen. Marco Rubio.

The Florida Republican, a Cuban-American and possible 2016 presidential candidate, opposes Obama’s policy change toward Cuba because he feels it empowers the Castro regime.

In announcing his invitation to Rosa María, Rubio made a public call for Obama to back an independent investigation into Oswaldo Payá’s death.

“I hope Rosa María Payá’s presence will at least remind him that her father’s murderers have not been brought to justice, and that the U.S. is now, in fact, sitting at the table with them,” Rubio said.

Oswaldo Payá was the lead organizer of the Varela Project, a petition drive regarded as the largest nonviolent campaign to change the communist system of government established by Fidel Castro.

The petition asked authorities for a referendum on guaranteeing rights such as freedom of speech and assembly in Cuba.

In July 2012, Paya and youth activist Harold Cepero died in a car crash in Bayamo, Cuba.

The Cuban government claims that the driver had lost control of the vehicle and collided with a tree, while Payá’s children—including Rosa María—and one of the car’s passengers allege that the car had been deliberately run off of the road.

It’s unclear how Obama’s plans for normalized relations with Cuba will impact the island’s future. But Rosa María is sure about what her father would have wanted to see.

“He wanted a future of reconciliation,” Rosa María said. “He believed deeply in the capacity of the Cuban people to decide and to build a future of prosperity and happiness for all of us.”