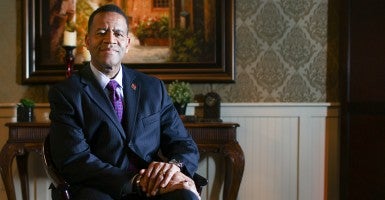 Former Atlanta Fire Chief Kelvin Cochran has filed a federal complaint that he is a victim of religious discrimination after losing his job after his writing about his views on homosexuality attracted attention.

Cochran, who is also a deacon at Elizabeth Baptist Church, was terminated after controversial passages about homosexuality were discovered in his book, “Who Told You You Are Naked?” self-published in 2013.

According to the Atlanta Journal Constitution, Cochran was fired by Atlanta Mayor Kasim Reed after his objection to Cochran’s description of homosexuality as “vile, vulgar and inappropriate at work.”

The complaint was filed with the Equal Employment Opportunity Commission on behalf of Cochran by his attorney, Jonathan Crumly, who alleges that Cochran’s termination is in violation of the Civil Rights Act of 1964.

“Americans are guaranteed the freedom to live without fear of losing their jobs because of their beliefs and thoughts. We are continuing to evaluate all available legal options to vindicate Chief Cochran after his unjust termination,” Crumly told the Atlanta Journal Constitution.

Crumly is affiliated with Alliance Defending Freedom, an organization that defends freedom of religion.

The Constitution reports that Cochran was told by city investigators that though they found “zero” examples of discrimination by Cochran, because he said “my faith influenced my leadership style,” he had to be fired.

City of Atlanta spokeswoman Anne Torres told the Atlanta Journal Constitution that the city would defend the mayor’s decision “whether through the EEOC administrative process or in any other appropriate forum.”

Ryan Anderson, the William E. Simon Fellow in Religion and a Free Society at The Heritage Foundation, said that “ordinary Americans—both those in favor of gay marriage and those who oppose gay marriage—understand that public servants shouldn’t be punished for their speech as private citizens.”

“This case,” Anderson added, “is another example of how some activists are pushing to blacklist those with traditional beliefs. Most Americans don’t like this—only the ideologues do. So while some activists push for this, ordinary citizens, whether they’re for or against gay marriage, do not want the government punishing people over their beliefs about marriage.”