New Poll: 8 Out of 10 Americans Support ‘Significant Restrictions’ on Abortion 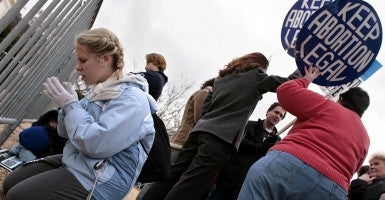 Pro-life And pro-choice activists gather to march for and against life. (Photo: Chip Somodevilla/Getty Images)

Forty-two years after the passing of Roe v. Wade, how do Americans really feel about abortion?

A new Marist poll sponsored by the Catholic organization Knights of Columbus asked Americans if they were pro-life or pro-choice – but they didn’t stop there.

The poll’s stated intention was to “understand Americans’ attitudes toward abortion,” including those who “do not strongly align with one side or the other,” and to identify the “nuances” in the abortion debate.

According to the poll, 47 percent of Americans identify themselves as pro-life, and 49 percent as pro-choice.

But it’s not that simple – Americans’ views on abortion are “complex.”

When respondents were offered “additional options,” a “good deal of common ground is revealed” between the two sides.

Eighty-four percent of respondents support some form of “significant restrictions” on abortion; such as limiting legal abortions to the first trimester of pregnancy, only allowing abortion in cases involving rape, incest or risk of maternal death – or not at all.

Sixty-nine percent of respondents who identified as “pro-choice” supported the same restrictions.

Sixty-four percent of respondents believe that the current abortion rate is “too high.”

Americans believe that laws shouldn’t force them to choose between a woman and her unborn child: 84 percent believe laws can be passed that protect both.

Regardless of their feelings on the legality of abortion, 60 percent of respondents said it was “morally wrong.” Fifty-nine percent say that abortion does a woman “more harm than good” in the “long run.”

Fifty-seven percent of Americans support allowing organizations with a moral objection to opt-out of providing abortion coverage, and 68 percent oppose the use of taxpayer money to fund abortion.

“Four decades after Roe v. Wade, the American people remain unhappy with its legacy,” said Knights of Columbus CEO Carl Anderson said in a statement. “The survey makes clear that the American people understand that abortion is far too common, and causes great harm. And even those who consider themselves ‘pro-choice’ want it reduced significantly. It is time that our lawmakers respond to this public consensus with appropriate legislation.”