33 Tweets Reacting to State of the Union From Top Liberal, Conservative Pundits 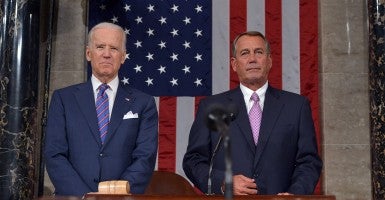 Vice President Joe Biden and Speaker of the House John Boehner wait for the start of the State of the Union address by President Obama on Jan. 20, 2015. (Photo: Mandel Ngan/UPI/Pool)

President Obama gave his annual State of the Union speech for the seventh time as president. His speech, which focused on the state of our country at home and abroad, had reaction from across both sides of the political aisle.

Does Boener have to look like he’s getting a colonoscopy everytime Obama says something good about America? I thought Repubs loved America?

I keep rewinding to “stop rewarding companies that keep profits abroad and reward those that invest here in America” to watch Boehner scowl.

Is this the first time a #SOTU has mentioned transgender and bisexual people?

So does Obama sound like a professor here or a preacher or nah?

The I-won-both moment was classic Obama. He has a great, sharp edge–that he does not often deploy in public. #SOTU

POTUS delivers the BOFA address tonight and it was epic. #SOTU #BNRNews

I have to say, that was the best speech Barack Obama has given as president. Third best he’s given at all (“Yes we can,” Philadelphia 1,2).

.@Sarahkliff is right — it’s bizarre that Obama doesn’t mention Obamacare given that open enrollment is going on now: http://t.co/D1V8APp65S

This is just an awesome speech.

One of the things I like best about this WH is their resistance to being drawn into clash of civilizations nonsense.

#POTUS double downed tonight on the spirit of his 2004 speech. Hope remains the battle flag of this presidency #SOTU #hardball #msnbc

Some focused their hate on House Speaker John Boehner:

Nice to see two people of color up on that dais. #SOTU2015

We have a bouquet at #SOTU2015–Obama (black America), Biden (white America) and Boehner (orange America)!

#ABetterPolitics When we don’t have a President who uses Class Warfare to divide the nation. #SOTU #TPSOTU

If Democrats would have run on the tax hikes, regulations, et al Obama proposed in SOTU, they’d have lost even more Senate seats.

The guy who weaponized gov’t agencies to persecute people who didn’t like his health care is lecturing on kindness. #SOTU

Obama’s message tonite was “Americans dreams will come true only if the government decides they will.” #SOTU

Obama: “I have no more campaigns to run. I know because I won both of ’em.” What a classy guy.

The ‘surely we can agree on a better politics’ section is surely the most cynical of the SOTU.

Hey president Obama 2004 called. It wants its clichés back.

If I were watching, I’d be suffering.

Whether you agree or disagree with his policies, this was the most connected speech POTUS has delivered in a long time. #foxnewsCHAT

Did a speechwriter actually write this? “Looking to the future instead of the past…that’s what keeps us strong….”

“Everyone does their fair share…. everyone contributes….” Notice the collectivism tone…. #SOTU

Have all of the Cuban political prisoners been freed yet? And Obama wants us to trust Cuba? #SOTU

When we stop fighting before our enemies are defeated, that’s not ending wars. That’s losing wars. #SOTU

Presidents need to hire people that will tell them the truth, not add a punctuation mark.