Hawaii’s Obamacare Exchange Projected to Be Financially Viable in 2022 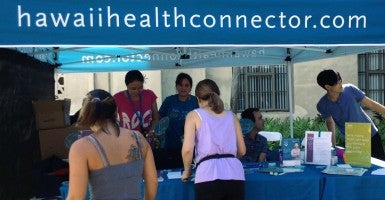 HONOLULU—The state’s Obamacare exchange, Hawaii Health Connector, is the most costly in the nation, and a new report from the Hawaii Commerce and Consumer Affairs Department shows it won’t be fiscally sustainable until 2022.

Kissel, who has been on the job less than 90 days, said he believes the department’s prediction is accurate and attainable.

Reg Baker, an accountant who previously served as chief financial officer for the Hawaii Medical Assurance Association, said finally becoming self-sustaining after over 10 years of design and implementation effort “is very disappointing.”

“If the plan was to receive state funding for 10 years, then that should have been incorporated into the connector’s business plan from the beginning and thoroughly discussed and approved by the state Legislature,” Baker said.

“The funding source to keep the connector operational should have been determined and secured a long time ago. This implies that they had other plans for funding operations that did not materialize for them—we all watched that unfold in the media.”

When the state’s Obamacare exchange launched in October 2013, then-Gov. Neil Abercrombie said he expected “hundreds of thousands of people” to enroll.

“Having 70,000 to 80,000 participants by 2022 is curious,” Baker said. “Is it coincidence that this just happens to be the estimated total of uninsured individuals in Hawaii that makes this a very politically correct and noble accomplishment, or hard for our elected officials to vote against?”

He added, “The historical financial and operational results of the connector do not provide much confidence that these newest projections will be any more accurate.”

The federal government initially funded the Hawaii exchange with a $204 million grant, but the connector was expected to be self-funded after 2014. That isn’t possible based on current enrollment, Kissel said.