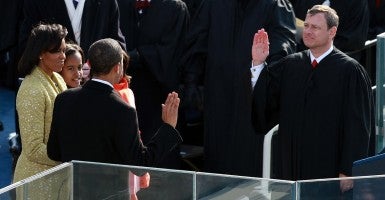 Barack H. Obama is sworn in by Chief Justice John Roberts as the 44th president of the United States. (Photo: Justin Sullivan/Getty Images)

On Jan. 21, the U.S. Supreme Court will hear oral arguments in a case involving the Obama administration’s favorite dubious legal theory, “disparate impact.” Then again, maybe it won’t — because the administration or some of its more radical allies in the civil-rights movement might snatch the case out of the court’s hands by engineering an eleventh-hour settlement. After all, they’ve done it twice before, thereby depriving the justices of the opportunity to strike down this misbegotten theory.

According to the lower court’s decision, ICP claimed that the distribution of low-income-housing tax credits to developers in Dallas by the Texas agency violated the Fair Housing Act because the state agency was “disproportionately approving tax credit units in minority-concentrated neighborhoods and disproportionately disapproving tax credit units in predominantly Caucasian neighborhoods.” The result, claimed ICP, was to create a “concentration of the [low-income housing] units in minority areas, a lack of [such] units in other areas, and maintaining and perpetuating segregated housing patterns.” ICP was unable to prove any intentional discrimination by Texas authorities in their administration of this program, but the lower court ruled in favor of ICP based on the disparate-impact theory, i.e., that the actions taken by Texas had a statistically disproportionate impact on minorities.

The issue before the Supreme Court is whether such statistical disparities alone constitute a violation of the Fair Housing Act, or whether the act requires claimants to show intentional discrimination. The Obama Justice Department has used disparate-impact theory to attack everything from the financial industry to local law enforcement. Under this theory, the lack of discriminatory intent, motive, or purpose is irrelevant. A completely neutral policy implemented with no intention to discriminate still violates the law if it affects one particular group more than others. And that group can be based on race, color, national origin, religion, sex, or familial status.

The problem with this theory is that the Fair Housing Act (42 U.S.C. §3604 et seq.) prohibits making housing or specific real-estate terms or conditions unavailable to an individual “because of race” or “based on race.” And under Section 3631, you can be criminally prosecuted if you willfully intimidate or otherwise attempt to interfere with a person’s ability to purchase or rent property “because of” or “on account of” his or her race. The straightforward text of the law makes it clear that only intentionally discriminatory conduct — disparate treatment — violates the law: You must have acted specifically because of the victim’s race.

This reading of the law is particularly important when one considers the severity of the criminal penalties involved: one year to life in prison, depending on the seriousness of the violation. Criminal penalties generally require intentional, knowing conduct, or mens rea, as the law terms it. As Roger Clegg of the Center for Equal Opportunity correctly says, “criminal prosecutions cannot be based on a disparate-impact theory. A construction of the Fair Housing Act that interprets a phrase one way in one section and in another way elsewhere is implausible.”

Because of this, the Obama administration and civil-rights groups have been terrified that the Supreme Court will get a Fair Housing Act case and make it clear that the law prohibits only intentional discrimination, which would toss out disparate-impact cases. That is why the current secretary of labor, Thomas Perez, when he headed the Justice Department’s Civil Rights Division in 2011, secretly engineered a quid pro quo deal with the city of St. Paul, Minn., to get the city to dismiss its challenge to a disparate-impact claim that was before the Supreme Court in Magner v. Gallagher. The United States wasn’t even a party to that challenge, but the Justice Department agreed that if St. Paul withdrew its challenge before the Court could hear oral arguments, the Justice Department would not intervene in an unrelated False Claims Act case seeking as much as $180 million from St. Paul for allegedly making false certifications to obtain federal housing grants.

Similarly, in 2013, the town of Mount Holly, N.J., settled its challenge to the disparate-impact theory of liability in a lawsuit brought by a residents’ group only a month before oral arguments were scheduled before the Supreme Court. The NAACP expressed its relief over the settlement of Mount Holly v. Mount Holly Gardens Citizens in Action, claiming that disparate impact is a “key tool to eradicate housing discrimination” and that actual “proof of intent to discriminate” is not required. The Obama administration agrees. Indeed, it actually issued regulations in February 2013 implementing such an interpretation.

But last November a federal district court in Washington, D.C., vacated these regulations and ruled that the Fair Housing Act bans disparate treatment only. In that case, Judge Richard Leon wrote:

Congress knows full well how to provide for disparate-impact liability . . . and has made its intent to do so known in the past by including clear effects-based language when it so chooses. . . . The fact that this type of effects-based language appears nowhere in the text of the FHA is, to say the least, an insurmountable obstacle to the [administration’s] position.

Further, the administration’s claim that the Fair Housing Act “presuppose[s] the presence of disparate-impact liability appears to be nothing more than wishful thinking on steroids!” Judge Leon concluded by noting, “This is yet another example of an Administrative Agency trying desperately to write into law that which Congress never intended to sanction.”

So the claim that the Fair Housing Act prohibits behavior that has a statistically disproportionate impact, regardless of whether there has been any intentional discrimination, is before the Supreme Court for the third time. We suspect that the state of Texas — unlike the city of St. Paul or Mount Holly Township — will refuse to blink and withdraw the case before the Court can finally decide whether this federal law is being misinterpreted not just by the courts, but also by the government.