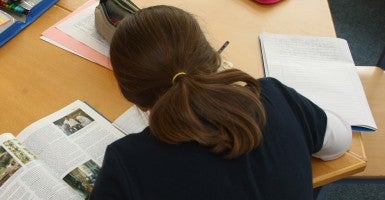 Local education needs are being ignored in a proposed rewrite of the federal No Child Left Behind law, an education policy expert says. (Photo: Getty Images)

Local education needs are being ignored in a proposed rewrite of the federal No Child Left Behind law, an education policy expert says.

Association of American Educators member Tracie Happel, a second-grade teacher at Northside Elementary in La Crosse, Wis., which has a high number of students from disadvantaged families, says students from low-income families don’t learn like other students.

“These kids don’t have the ability to sit down and take a test,” Happel said. “It doesn’t matter if they can’t do something that an arbitrary standard said to do. [There should be a] system at the local level being devised to measure that growth for each student, and the teacher being held accountable to their growth.”

Since federal mandates don’t seem to match up, working toward local control is crucial to helping students in low-income areas, she said.

Sen. Lamar Alexander, a Tennessee Republican who is chairman of the Senate Education Committee, this week released a draft of a bill to rewrite No Child Left Behind.

The bill would curtail some federal involvement of K-12 education.

But Lindsey Burke, the Will Skillman fellow in education at The Heritage Foundation, said the rewrite is a “missed opportunity to limit Washington overreach.”

The rewrite does provide an option for more state and local control over testing methods, but states still would be required to submit their statewide standards to the federal government, essentially rendering the local option moot.

Instead, a rewrite of the federal law should allow for states states to have multiple standards if they choose, Burke said.

The conservative alternative to the NCLB—Academic Partnerships Lead Us to Success Act, known as A-PLUS—is the best policy to give states control, Burke said.

A-PLUS allows states “to opt-out of No Child Left Behind and prioritize federal funding for any education purpose under state law,” Burke detailed in a December report.

Not only does Alexander’s proposal fail to provide the states with true control, it also missed a chance to give low-income students the option to attend a private school of their choice, Burke said.