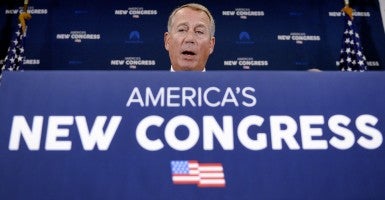 A group of conservative leaders has a message for Congress: Remember what voters told you in November.

“The message from voters was an emphatic rejection of President Obama’s policies,” says @RichardViguerie

The “Citizens Mandate From the November 2014 Election” provides Congress with marching orders and vows to hold lawmakers accountable if they fail to heed the will of the American people.

A group of 53 conservative leaders and organizations released the mandate Thursday. They argue President Obama’s policies were on the ballot last fall—and he lost.

“The message from voters was an emphatic rejection of President Obama’s policies, which he said were on the ballot,” Richard Viguerie, chairman and founder of Conservative HQ, and one of the signers of the mandate said in a statement.

“The Republican Party’s Capitol Hill leaders have an obligation to the voters who entrusted them with this historic majority to stop Obama’s unconstitutional executive amnesty, repeal Obamacare and return health care choices to doctors and patients, and, most importantly, to end the culture of lies, lawlessness and corruption with which Barack Obama has infected our government,” Viguerie said.

Sandy Rios, director of governmental affairs for the American Family Association, added: “The ‘Citizens Mandate’ should remove all ambiguity. The people spoke … and make no mistake … THIS is what they said.”

According to the signers, the 114th Congress has a golden opportunity to reverse years of business-as-usual in Washington.

The Citizens Mandate declares that lawmakers should:

1) “Fight for our founding principles, smaller government and constitutional rights:” The new Congress should fight for constitutional, limited government. They should prevent the corrosive practice of “using the law to artificially create winners and losers.”

2) “Shine the light of oversight on abuse of power:” Congress should conduct hearings to hold government officials responsible for law-breaking, the misuse of taxpayer funds and political targeting.

3) “Promote and fight for limited, accountable government:” Members of Congress should fight efforts on gun control, amnesty, bailouts and other “lawless” initiatives. They should work to uncover the truth about the attack on the American consulate in Benghazi.

4) “Return to Regular Order:” Legislation should begin in subcommittees, not the White House. Lawmakers should be given “adequate time” to carefully and thoughtfully consider each individual bill. More decision making should fall to “members, senators and the public,” rather than congressional leadership.

The group also issued recommendations on which issues should receive attention and focus from Congress first. They include working to prevent a nuclear Iran and overturning the president’s executive action on immigration.

Failure to stop Obama’s agenda, the signatories say, would be a “base betrayal of both the principles Congress swore to defend and those who entrusted them to do just that.” They warn that they will “take stock of Congress’ progress annually.”

You can read the mandate here.