At Least One Lawmaker Supports a Third Romney Run for President 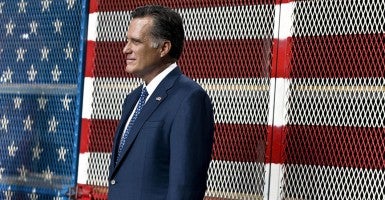 Rep. Jason Chaffetz of Utah is on board with a potential third run from Mitt Romney (Photo: Brian Cahn/Newscom)

HERSHEY, Pa. — Mitt Romney may not have support from Sen. Rand Paul of Kentucky. But Rep. Jason Chaffetz of Utah is on board with a potential third run from the 2012 Republican presidential candidate.

Speaking with reporters today at the joint Republican retreat in Hershey, Penn., Chaffetz, a Romney supporter, endorsed another White House run from the former Massachusetts governor.

“As a Republican presidential candidate, I think Romney checks three boxes: he’s well-vetted— we know exactly what we’re going to get—he was right on the issues … and he is one of the few people that can raise the $1 billion it’s going to take to beat Hillary Clinton,” Chaffetz said.

.@jasoninthehouse: Romney is the only candidate right now who could outraise Hillary pic.twitter.com/kAgKr3pg8f

Chaffetz noted that Romney was right on a variety of foreign policy positions, including the classification of Russia as our “number one geopolitical foe.”

Speculation that Romney would make a third run for the presidency came to a head last week when he told a group of donors that he was interesting in running for president again. It was then reported that Romney was making calls and connecting with former aides and donors to prepare for the 2016 race.

Romney and former Florida Gov. Jeb Bush are the only two prospective candidates to announce their explorations of a presidential campaign. However, Chaffetz dismissed another Bush presidency.

Chaffetz’s endorsement of Romney comes two days after Paul said he disapproved of the idea of Romney making a third White House run.

“I think he’s had his chance,” Paul said in an exclusive interview with The Daily Signal, “and I think it’s time for some fresh blood.”

>>> Christie Looks Beyond Jersey with Swipe at Partisan Politics, Appeal for ‘American Renewal’