George Clooney on Charlie Hebdo: ’We Will Not Walk in Fear’ 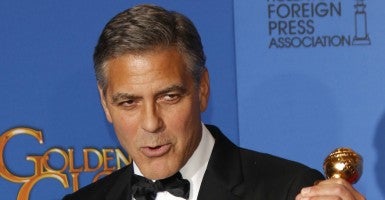 The murder of 12 people at Charlie Hebdo magazine headquarters by Islamic terrorists is one of the worst terror attacks in the country’s recent history.

The Globes coincided yesterday with a rally in Paris that drew international leaders and more than 1.5 million people to support Charlie Hebdo and free speech overall.

“Just one last thing I would say is just to reiterate what we have all be talking about—today was an extraordinary day. There were millions of people that marched, not just in Paris but around the world,” Clooney said. “And they were Christians and Jews and Muslims.”

“They were leaders of countries all over the world and they didn’t march in protest,” he continued. “They marched in support of the idea that we will not walk in fear. We won’t do it. So, ‘Je Suis Charlie.’ Thank you.”