Raul Castro Is Already Double-Crossing Us Over Cuba Deal 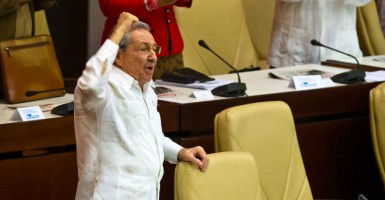 President Obama’s change of policy on Cuba looks worse with every passing day.

Remember the 53 political prisoners that Obama promised would be released? Three weeks later, the State Department could not confirm even one had been let out of prison. That became abundantly clear during an awkward, five-minute standoff between State Department spokeswoman Jen Psaki and reporters on Jan.5. Only after this embarrassing exchange did Washington and Havana rushed to say that “some” of them had been let out.

Why did Psaki pussyfoot around the issue? Earlier, administration officials had told the Wall Street Journal’s Mary O’Grady that to push Cuba’s communist leaders on the release of the 53 would only upset them. As O’Grady put it, “in other words, the Castros are sensitive boys who throw despotic tantrums when their absolute power is questioned. Asking them to keep their word is apparently a trigger.”

Not only has dictator Raul Castro hosed President Obama with false promises about releasing political prisoners, he has actually unleashed another wave of arrests. Performance artist Tania Bruguera was one of many taken in last week. She was hauled away as she prepared to enter Revolutionary Square. Armed with a microphone, she was going to commit that most abject of sins in a communist country: speaking out.

Cuban dissidents across the board have denounced Obama’s decision to recognize the Castros’ illegal regime. Perhaps none have condemned what they call Obama’s betrayal more eloquently than Guillermo Farinas, winner of the EU’s 2010 Sakharov Prize for human rights. Farinas told Britain’s Guardian newspaper: “We live in daily fear that we will be killed by the fascist government. And now, the U.S. — our ally — turns its back on us and prefers to sit with our killers.”

Brave souls who risk their lives in Havana every day to claim rights we take for granted in this country have long looked to the U.S. as a beacon of freedom. No wonder they feel betrayed. And they aren’t the only ones. Obama’s abrupt change in U.S. policy has also let down Israel, one of our strongest allies in the world.

Year after year, Israel has been one of the few countries to support the U.S. in the United Nations as the world’s kleptocracies, genocidal regimes and failed states vote to condemn the U.S. embargo on Cuba. Yet the Obama administration didn’t have the courtesy to inform Jerusalem of its impending move.

“They didn’t even give us a few minutes’ notice,” a miffed senior Israeli official told Israeli newspaper Haaretz.

Israelis now have the right to fear that recognizing Palestine as an independent state is on President Obama’s “bucket list” as he prepares to leave his “historic” mark on numerous fronts.

Conversely, Obama’s reversal of U.S.-Cuba policy comforted our worst enemies in the Middle East. After Cuba’s ambassador to Beirut, Rene Ceballos Prats, met with Hezbollah’s Ammar Moussawi to brief him on the policy change (Cuba does keep faith with its allies), Moussawi said, “The achievements of Cuba, which was firm on its principles, is a lesson for all people of the world who are suffering from American hegemony.”

One non-terrorist group in the United States is cheering President Obama’s change of policy — the agricultural lobby. On Jan. 5, Politico Pro reported that Big Ag is getting ready to spend millions of dollars lobbying Congress to lift the embargo and let U.S. banks finance exports to Cuba, something only Congress can do.

“It’s going to take an act of Congress to get to a point to where we can compete [in Cuba],” Cargill’s Vice President of Corporate Affairs Devry Boughner Vorwerk told Politico. Vorwerk is the chairman of the brand new U.S. Agriculture Coalition for Cuba, a farm and food lobbying group.

A policy change that allows Raul Castro to double-cross the U.S., betrays long-tormented dissidents and our ally Israel and is lauded by terrorist-sponsoring regimes and crony capitalists. What’s not to like?