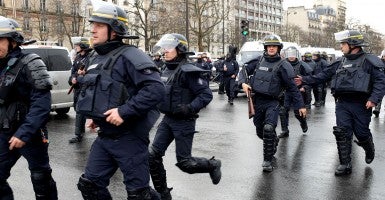 Cherif Kouachi and Said Kouachi had been holding a person hostage inside a commercial printing house near Charles de Gaulle Airport. The hostage was unharmed.

Police also resolved a second hostage situation that erupted Friday morning at a Kosher supermarket on the eastern edges of the capital, where an alleged associate of the Kouachi brothers was holding hostages. At least some of those hostages escaped unharmed, according to the police.

I'm struck by how much this young survivor looks like my own son. A painful day for many parents here #ParisShooting pic.twitter.com/EPi3t65qeg

“Those who committed these acts have nothing to do with the Muslim religion,” Hollande added.

Coulibaly was also thought to be responsible for the killing of a female police officer in Montrouge, a suburb south of Paris, on Thursday morning.

Police released a photo of Coulibaly and his suspected accomplice in the death of the policewoman, Hayet Boumeddiene, 26.

Boumeddiene is believed to still be on the run.

The hunt for the female suspect is on: http://t.co/v0z822hdRk pic.twitter.com/v7ykmuvLfv

As the supermarket crisis unfolded, authorities ordered shopkeepers in the Jewish neighborhood to close and schools to enter lockdown.

CNN reports that Said Kouachi, 34, traveled to Yemen in 2011 and received terrorist training from al-Qaeda’s affiliate there before returning to France. His younger brother Cherif, 32, was detained and later arrested in 2008 for his involvement in a Paris terrorist cell that had been recruiting French citizens to fight in Iraq.

“The latest developments in Paris underscore that France is a nation under siege from Islamist militants,” Gardiner said.  “The West must emphatically defeat Islamist terrorism in Europe as well as in their safe havens in the Middle East.”