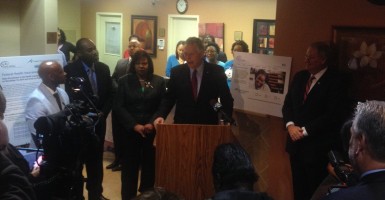 Federal taxpayers are pitching in $2 million for a marketing campaign to make sure Virginians eligible for government-subsidized health care know how to enroll.

The commonwealth isn’t expanding Medicaid eligibility under the Affordable Care Act, at least not yet. Still, a federal exchange grant that runs through December 2015 will help Gov. Terry McAuliffe accomplish his mission of marketing health care options to the masses. Right now, it’s all federal funding, but the governor wants to use state funds for the cause, too.

In October, the Department of Medical Assistance Services signed a $2 million contract with Richmond-based Big River Advertising for a “design, production and marketing campaign to effectively target Virginians who are uninsured or underinsured and eligible for health insurance through the federal health insurance marketplace, Medicaid, or Child Health Insurance Program,” according to the commonwealth’s online procurement records.

Through radio ads, online banner ads and television ads, Big River is trying to boost the name ID of Cover Virginia, the state website that directs people to check their eligibility for health programs and subsidies on the federal exchange.

“Those materials focus on two messages for Virginians: the consumer assistance is available to help with the application process and that plans on the (federally facilitated marketplace) are affordable,” DMAS said through spokesman Craig Markva.

Some states, like Oregon, have gone all out with their marketing campaigns. The Cover Oregon exchange, which eventually failed, launched perhaps the most hipster and trippy TV campaign, with flying people.

One of those changes included leveraging state and federal funds to raise eligibility awareness with the goal of enrolling an additional 35,000 children in FAMIS, the state’s program for children, and 160,000 people in the federal health insurance marketplace.

McAuliffe said he’s hoping for up to $14 million in federal funds, but didn’t specify how much will come from state coffers.

“This outreach campaign will inform Virginians about coverage options that are already available through the federal marketplace, Medicaid and FAMIS,” McAuliffe said at the time.