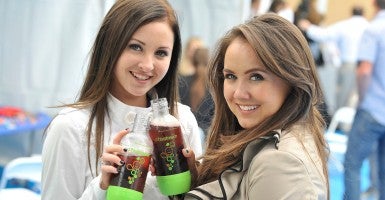 Harvard University’s dining services backtracked on a plan to boycott Israeli-based SodaStream following a rebuke from the university president. Palestinian students had complained that the mere logo offended them.

“These machines can be seen as a microaggression to Palestinian students and their families and like the university doesn’t care about Palestinian human rights,” Rachel Sandalow-Ash, a senior member of the Harvard College Progressive Jewish Alliance, told the school’s newspaper.

Campus activists across the United States have cited “microaggressions,” unintended or minor slurs that offend or discriminate against minority groups, as the root of various protests or movements. Harvard’s is the most recent case.

Members of the Palestine Solidarity Committee and the Harvard Islamic Society cited “discomfort” with the SodaStream machines in meetings with university officials to have them removed, according to the “Harvard Crimson.”

The groups said the machines might offend those affected by the Israeli-Palestinian conflict as the company’s main factory is based in the long disputed West Bank. SodaStream announced in October it would be moving the factory from the contested area to southern Israel.

“Harvard University’s procurement decisions should not and will not be driven by individuals’ views of highly contested matters of political controversy,” Provost Alan Garber wrote in an email Wednesday. “If this policy is not currently known or understood in some parts of the university, that will be rectified now.”

Dining services responded yesterday, writing in a statement that it had “mistakenly factored political concerns” into the decision.

The fate of the campus’ ties to SodaStream has not yet been determined.