How Many Americans Are OK With Nativity Scenes in Government Buildings? 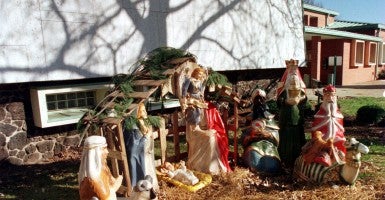 Despite annual controversy surrounding religious holiday displays, nearly 3 out of 4 Americans believe Christian symbols should be allowed on government property, according to the Pew Research Center.

Pew found that 44 percent of Americans believe Christian symbols such as the nativity scene should be allowed on government property, even if other religions’ symbols are not present. Twenty-eight percent believe Christian symbols should be allowed only if symbols from other religions, such as a menorah, are included as well. A smaller 20 percent say no religious displays should be permitted on government property. The survey also found most Americans believe key events in the biblical Christmas story are historically accurate. About three-quarters believe that Jesus was born to a virgin, that an angel announced the birth of Jesus to shepherds  and that “wise men, guided by a star, brought Jesus gold, frankincense and myrrh.” A whopping eight out of 10 Americans believe Jesus was laid in a manger.

Sixty-five percent of Americans believe all four of these events reflect history, and only 14 percent do not believe in any of them.

The poll surveyed 1,507 adults through both cell and landline telephone interviews.