Why Australians Responded to the Sydney Hostage Crisis With #IllRideWithYou Tweets 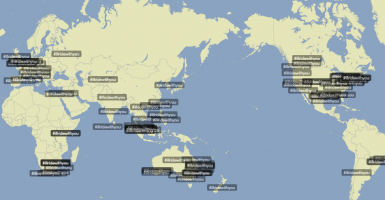 A Twitter campaign called #IllRideWithYou spread across Australia today following news that a gunman, reportedly Muslim, had taken hostages in a Sydney cafe.

Amid the chaos, Australians banned together in hopes of combating “anti-Muslim sentiments” and started a Twitter campaign using #IllRideWithYou.

The hashtag began after an Australian woman named Rachael Jacobs saw a Muslim woman on the train removing her hijab, a veil worn by Muslim women that covers the head and chest. Jacobs told the woman to keep the veil on, and she told the woman she would walk with her.

The movement quickly spread as a way to encourage solidarity with the Muslim community and began trending on the social media site worldwide.

Monis had instructed hostages to hold up a black flag with white Arabic text and demanded a phone call with Australian Prime Minister Tony Abbott. Two people died, and three were seriously wounded.

Here are some tweets mentioning #IllRideWithYou:

If you reg take the #373 bus b/w Coogee/MartinPl, wear religious attire, & don’t feel safe alone: I’ll ride with you. @ me for schedule.

#illridewithyou is an amazing initiative. I live in Bondi Junction and work in the city. happy to help where possible

Those living in the City of Casey who feel unsafe, #illridewithyou. Message me and we'll work something out.

I was going to drive to work tomorrow but seeing the outpouring of support changed my mind. #illridewithyou Thank you. See you on the train!

Up and down the South Morang train line and #illridewithyou

I ride Croydon to Town Hall in the morning. Let me know if you need the company. #illridewithyou

Travelling from Stanmore to the City on public transport tomorrow? If you don't feel safe #illridewithyou

Humanity at its finest. #illridewithyou because we are all humans and should be treated equally.

Saddened by the madness in Sydney. Hopeful because of the #illridewithyou movement – we are in this together

The #illridewithyou campaign makes you feel truly proud to be an Australian. Let's greet all Muslim citizens tomorrow with a smile.

Beautiful: An Imam, a Rabbi and a priest hold joint prayer session for hostages – via @tomsteinfort pic.twitter.com/Taf9E9EYiA #illridewithyou

As long as the West responds to Islamist terror as naively as #Illridewithyou instead of calling it what it is, it'll continue unabated.

Is anybody saying #illridewithyou to all the people who are afraid to go to cafes today? If not, why not?

#illridewithyou let's all stand up to next week's imaginary backlash to today's hostage crisis. #bravery