Pastor: As Father of Four Adopted Children, Being Forced to Cover Abortions Is ‘Repulsive Beyond Words’ 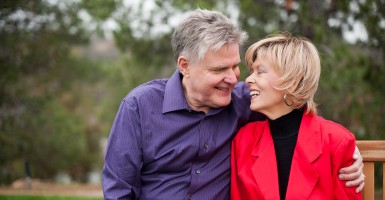 For 36 years, Jim Garlow didn’t know his first adopted child was the result of a rape.

But after his wife Carol lost a six-year battle with cancer last year, their daughter, Janie, went in search of her birth mother. In succeeding, Janie also discovered the horrific circumstances of her own conception.

The story spurs Jim Garlow, a pastor in California, to fight a state mandate that his church’s employee health plan pay for elective abortions.

When Janie’s birth mother was a freshman in high school, two senior boys asked her to go to the movies. Instead, they took her to an open field, where they raped her. She became pregnant.

Heroically, the teenage girl decided not to get an abortion but to keep the baby until birth, then give her up for adoption. In an emotional interview with The Daily Signal, Garlow says the decision that spared his future daughter wasn’t the result of her birth mother’s “profound religious convictions” but because “she felt like it was the right thing to do.” Garlow, 67, is senior pastor of Skyline Church in San Diego, founded in 1954 as part of the Wesleyan denomination. After the death of his first wife, he married Rosemary Schindler, an active advocate for Christians all over the world.

Their father regards the four Garlow children as the fruit of four women who made the “courageous” decision to go through with their pregnancies. The most courageous of all, he says, was Janie’s mother.

His religious beliefs, combined with a deep gratitude for the four mothers who chose to keep their unborn children, have anchored his pro-life views.

And then this fall, the unimaginable happened: Garlow discovered the state of California was forcing him and the staff of his church to pay for  health insurance plans that cover elective abortions.  They have no choice.

The state’s rule, the pastor says, defies every fiber of his being:

I feel that not only [that] the killing of babies in the womb is wrong foundationally, but as a father who had the privilege of adopting four children … was repulsive beyond words. Garlow didn’t know how to break the news to his tight-knit congregation. After he was asked to speak at a congressional briefing Dec. 1,  though, he sent an e-blast to parishioners, writing:

I apologize for bringing bad news. This is shocking … and repulsive. As of last Aug. 22, our California state government (not Obamacare, this is the state) has required all insurance policies to cover elective abortions. This includes us as a church. We – along with other churches and Christian colleges – are protesting this coercive and intrusive action by filing formal protests against this abusive action. I will be speaking on this topic this week in Washington, D.C., at a special hearing at which we are strongly urging the federal government to step in immediately and pass the ‘Abortion Non-Discrimination Act.’ Pray for me as I speak. And pray for Congress to act – now.

Call it ironic: Churches in California are forced to pay for abortions through employee health insurance, but under Obamacare are supposed to be exempt from paying for contraceptives and abortion-inducing drugs for their employees.

Since 2005, under a measure known as the Weldon Amendment, Congress has prohibited states that receive certain federal funds from discriminating against insurance plans that don’t provide abortion coverage. The Hyde Amendment, first passed in 1976, prohibits using federal tax money to pay for elective abortions.

So how did this happen in California?

Mattox, who represents Garlow’s Skyline Church and seven other churches in California, recalls how the issue of contraceptives was debated as part of Obamacare:

Legislatures realized, ‘We can’t force churches to pay for contraceptives,’ that clearly you have to exempt churches from that mandate. [State lawmakers] were able to put in appropriate exemptions to make sure at least some aspect of religious liberty was protected, but this [California] abortion mandate just went through a bureaucratic process. It’s basically a sneak attack on religious liberty. It came out of nowhere.

The rule came after the American Civil Liberties Union convinced state insurance officials that abortion is a “basic health service.” Siding with the ACLU, state bureaucrats decided the agency no longer would approve health plans that don’t cover the life-ending procedure.

“There was no opportunity for churches to weigh in on the process,” Mattox says.

In September, the lawyer filed an administrative complaint on behalf of Garlow and other California pastors with the Office of Civil Rights in the U.S. Department of Health and Human Services. The pastors have yet to receive a response.

Sarah Torre, a policy analyst who follows religious liberty cases for The Heritage Foundation, says that in the current legal landscape, the decision before pastors such as Garlow is this: Continue offering health insurance covering procedures that end the life of unborn children, or drop insurance altogether.

“So Pastor Garlow and others can do nothing but wait on bureaucrats in HHS to enforce the law,” Torre says. The crowd listens to Jim Garlow at the 2010 West Coast Walk for Life in San Francisco. (Photo courtesy Jim Garlow)

Churches and other religious organizations can avoid the mandate by self-insuring, but it’s a costly endeavor that could take months, even years.

“We can’t self-insure, Garlow says. “We’d need years of preparation to be in that kind of posture economically.”

Garlow and others appealed to Congress, hoping his story would spur legislation to protect the conscience rights of individuals and churches.

“Forcing pastors, teachers, social service providers and Catholic institutions to pay for abortion should be unthinkable,” they wrote.

HHS has yet to respond to the lawmakers’ request to enforce the Weldon Amendment in California.

It is clear that Burwell “does not intend to enforce the law,” Fleming told The Daily Signal.

Conservative lawmakers are pushing for passage of the Abortion Non-Discrimination Act, part of H.R. 940, which would allow individuals to pursue legal action to protect their religious rights.

Pro-life members of the House and Senate will not back down, Fleming says, but their success depends upon the support from Republican leadership, which previously blamed inaction on Senate Majority Leader Harry Reid. In January, though, the Nevada Democrat will be succeeded by current Minority Leader Mitch McConnell, R-Ky., when Republicans claim their new nine-seat majority in the Senate as a result of the midterm elections.

“That excuse is getting very weak now that we have won a majority in the Senate and we have a resounding majority in the House,” Fleming says. “It’s time that our GOP leadership begins to get on board.”

Until then, California churches are expected to pay for a life-ending procedure that contradicts the core of their beliefs.

“I can’t fathom us participating in something so horrific and sinful,” Garlow says.

Sadly, the pastor and his supporters believe, he already is. Jim and Rosemary Schindler Garlow. They married after the death of his first wife. (Photo courtesy Jim Garlow)