When It Comes to Defunding Amnesty, Congress Needs to Act Now 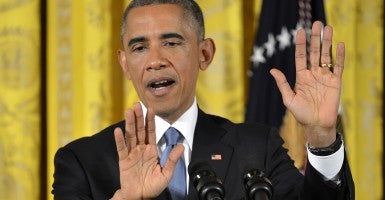 In the debate surrounding President Barack Obama’s immigration amnesty plan, there is increasing attention over the fact that Obama initiated his amnesty without an executive order. However, this does not alter the appropriate congressional response. Congress needs to act as soon as possible to not only refuse to appropriate new money to fund the administration’s unilateral action, but to specifically ban the use of already-appropriated funds to implement any aspects of the deferred action plan.

It is certainly true that Obama has not signed an executive order implementing his amnesty plan. But then, he didn’t need to. In fact, Obama acted to implement his plan through Jeh Johnson, secretary of the Department of Homeland Security, on the very same day he gave his speech.

Johnson issued a memorandum on Nov. 20 to the respective heads of the Citizenship and Immigration Service, Immigration and Customs Enforcement, and Customs and Border Protection divisions of DHS directing them to implement Obama’s amnesty. The memorandum, “Exercising Prosecutorial Discretion with Respect to Individuals Who Came to the United States as Children and with Respect to Certain Individuals Whose Parents are U.S. Citizens or Permanent Residents,” is “intended to reflect new policies for the use of deferred action.” The Nov. 20 memorandum “supplements and amends” the June 15, 2012, memorandum issued by former DHS Secretary Janet Napolitano that established the president’s first deferred action or amnesty plan.

On the day before, Nov. 19, the Office of Legal Counsel of the U.S. Department of Justice issued a “Memorandum Opinion for the Secretary of Homeland Security and the Counsel to the President” justifying the DHS memorandum as a “permissible exercise of DHS’s discretion to enforce the immigration laws. In fact, the Johnson and OLC memoranda are the basis for the lawsuit that already has been filed in Texas by 17 states against the administration.

So Obama’s new, expanded amnesty plan is now in place at DHS with the blessing of the Department of Justice, and all of DHS’s components have been directed to implement it.  There is probably enough flexibility in the DHS appropriation so that current funds can be used, particularly the current funds being used to implement the Janet Napolitano 2012 amnesty program.

For any who doubt that the administration is moving ahead with the president’s policy, DHS is already working on hiring 1,000 new full-time employees at an “operational center” in Virginia to process applications and issue work permits to the 4-5 million illegal aliens who qualify – and “many of the openings were posted the day after” Obama’s speech. The Johnson memorandum has numerous instructions that are to be implemented immediately, such as “identifying persons in their custody, as well as newly encountered individuals, who meet” the criteria for deferred action. The removal cases against those aliens are to be closed or terminated and all enforcement actions against them stopped.

So Congress needs to act immediately if it wants to prevent DHS from using any funds that already have been appropriated to implement the president’s plan.   And it needs to make sure that no funds are appropriated in the future for the president’s unilateral and unconstitutional actions. The time to act is now.