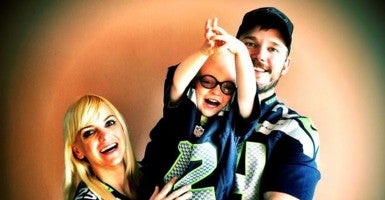 Chris posted this photo of his son and wife, Anna Faris from his Twitter account (@PrattPrattPratt) on Thanksgiving with the caption '#HappyThankgiving #12thMan.'

“Guardians of the Galaxy” star Chris Pratt spoke at last Friday’s March of Dimes Celebration of Babies — and things got emotional as he recounted the birth of his son, Jack. Chris arrives at the March of Dimes Celebration of Babies at the Regent Beverly Wilshire Hotel in Beverly Hills. (Photo: Newscom)

“I made promises in that moment about what kind of dad I wanted to be, and I just prayed that he’d live long enough that I could keep them,” he said. Baby Jack at the Farmers Market in Studio City, Calif. with his parents. (Photo: Newscom)

Chris, who graces the pages of GQ’s 2014 Men of the Year issue, told the magazine doctors told him they need to be prepared for a special-needs child. Although they were devastated, Chris said, “It also felt like, you know, ‘We can do this. He’s alive.'” “It restored my faith in God, not that it needed to be restored, but it really redefined it. The baby was so beautiful to us, and I look back at the photos of him and it must have been jarring for other people to come in and see him. But to us he was so beautiful and perfect.”

In his speech, Chris said his son is now a “strong, smart, happy, funny, beautiful boy” who loves monster trucks, Daniel Tiger and even vegetables.

So awesome my child can feed himself-now I can go back to bed pic.twitter.com/vWnhX4jacz