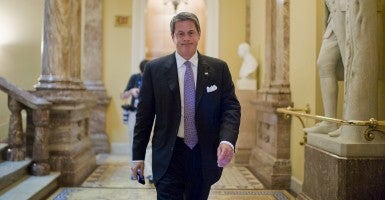 Sen. David Vitter, R-La., has drafted legislation to prohibit the federal government from “mandating, incentivizing or coercing” states to adopt the national education standards known as Common Core, The Daily Signal has learned.

The intent of Vitter’s bill is to enable states to more easily exit the national standards, which more and more parents and educators have come to oppose, by voiding requirements attached to previously issued waivers from federal law.

States likely could retain their waivers from the law, called No Child Left Behind, even if they chose to pull out of Common Core.

Opponents have criticized the Obama administration for “incentivizing” states to sign on to the Common Core standards by offering $4.35 billion in grants and waivers under its “Race to the Top” program.

Of his bill, Vitter, a former supporter of Common Core, told The Daily Signal:

I’ve fought tooth and nail for local control of education and against the enormous growth of federal power under President Obama. That includes prohibiting the federal government from mandating, coercing or bribing states to adopt Common Core or its equivalent.

Vitter quietly filed his legislation, the Local Control of Education Act, as a standalone bill last week but intends to propose it as an amendment to the spending bill that Congress must pass this week.

The bill aims to “prohibit the federal government from mandating, incentivizing or coercing states to adopt the Common Core state standards or any other specific academic standards, instructional content, curricula, assessments, or programs of instruction.”

Vitter, who intends to run for Louisiana governor in 2015, changed his position on the Common Core standards. Four months ago, in an interview with C-SPAN, the Republican lawmaker said he “strongly supports” the standards.

Of his reversal, Vitter said in a Dec. 1 press release:

After listening to literally thousands of parents, teachers and others since then, I don’t believe that we can achieve that Louisiana control, buy-in and success I’m committed to if we stay in Common Core. Instead, I think we should get out of Common Core/PARCC and establish an equally or more rigorous Louisiana system of standards and testing.

PARCC, which stands for the Partnership for Assessment of Readiness for College and Careers, is a group of states working to develop a set of assessments in math and English to measure whether students from kindergarten through 12th grade are on track to succeed in college and career.

>>> Bobby Jindal Explains Why He ‘Flipped’ on Common Core

In June, Jindal bypassed the state legislature and issued a series of executive orders withdrawing Louisiana from Common Core and all federally subsidized standardized tests.

Louisiana’s Board of Elementary and Secondary Education teamed with a group of parents to challenge the legal groundwork for that lawsuit. In filing a countersuit against the governor, they left the status of Common Core in Louisiana murky.

The federal government’s actions are in violation of the Constitution and federal law, which is why we filed a lawsuit to fight Common Core in federal court. We also joined our state legislators in a state court suit against Common Core, and we will work next legislative session to create high Louisiana standards that are best for our children and keep education left to local control.

Vitter, with his eye on Jindal’s job, wants to see states be eligible for federal grants regardless of whether they signed on to Common Core.

Lindsey M. Burke, The Heritage Foundation’s Will Skillman fellow in education policy, said Louisiana is home to some of the most innovative school choice options in the country. For  parents there, she said, “retaining control of education decisions is critically important for ensuring that type of innovation and customization can continue in the future.”

National standards and tests are a threat to the welcome proliferation of school choice, which Louisiana has been a big player in advancing in recent years.

>>> Commentary: It’s Not Too Late for States to Reject Common Core

Michael Brickman, national policy director at the Thomas B. Fordham Institute, an education policy think tank that supports Common Core, said he “absolutely agrees” with efforts to separate federal funds from implementation—although most of the Race to the Top grants have been distributed.

In a telephone interview, Brickman said:

The National Governors Association and the Council of Chief State School Officers first developed the idea of Common Core standards in 2009 as a way to boost education standards across the board. In the years since, parents, politicians and political organizations have become deeply divided on how the standards and tests are implemented in their states.

In addition to Louisiana, three states—Indiana, Oklahoma and South Carolina—acted to pull out of Common Core this year. More than a dozen others either have exited or downgraded their involvement with the assessment component.

Critics argue the adoption of Common Core surrenders control of the content taught in local schools to political organizations and bureaucrats in Washington. They say the standards are not likely to improve student performance in comparison to other nations.

Champions argue that Common Core sets better education standards without dictating curriculum. They say states are free to opt in or out, or make adjustments as they see fit.

“Louisiana has the option to change the Common Core if it wishes,” Fordham Institute’s Brickman says. “Other states have made changes to Common Core or opted not to use the standards at all.”

But Palmieri, who has been deeply involved in Jindal’s education battle in Louisiana, dismissed as a “smokescreen” the narrative that Common Core is simply academic standards. She told The Daily Signal:

Curriculum is the product of standards and assessments—and educators know that what’s tested is what’s taught. And what’s tested is controlled by the federally funded testing consortia, PARCC and Smarter Balanced, and states held hostage by federal grants like Race to the Top. The bottom line is that Common Core is about controlling curriculum. These are big government elitists that believe they know better than parents and local school boards.

With reading proficiency in the early grades at a dismal 23 percent in Louisiana, the debate over Common Core standards is likely to persist as a top issue in the race for governor.

In Louisiana, we need a system in place that truly prepares our children to be successful in higher education and the workplace that is as or more rigorous than Common Core.