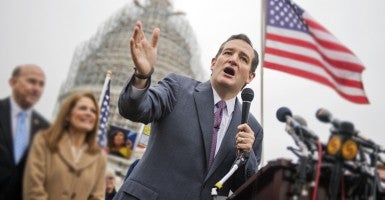 Parkland and wilderness provisions added to a defense policy measure have outraged friends of the military, who call the move both a “land grab” and a slap at men and women serving in the armed forces.

But this year the annual defense authorization includes a multitude of non-defense provisions such as new parks, wilderness areas and a national museum celebrating women. The move irks conservatives and other proponents of a “clean” bill.

“The decision to attach an extreme land grab to the NDAA is a disservice to members of the armed forces,” Sen. Ted Cruz, R-Texas, said in a prepared statement. “With the military’s shrinking budget, it is offensive that this bill would be used to fund congressional pork.”

Top lawmakers on the House and Senate armed services committees previously faced a stalemate on the language of the defense authorization, specifically over employment benefits for the troops. However, a compromise bill emerged this week after Republicans and Democrats met behind closed doors.

Included in this year’s authorization is language to train and equip “moderate” Syrian rebels to combat ISIS, the brutal terrorist organization also known as the Islamic State. At President Obama’s request, Congress authorized funding to “degrade and destroy” ISIS in September as part of a short-term government spending measure that expires Dec. 11.

However, what has upset Cruz and other critics are non-military provisions to:

Sen. Tom Coburn, R-Okla., who retires at the end of the year, took to his Twitter account to criticize the provisions, which he said are the result of backroom deal-making.

Just in time for Christmas, Congress sneaks hundreds of millions worth of pork into unrelated Defense bill via backroom deals. #SecretSanta

As NPS faces an unsustainable $12B maintenance backlog, parochial Congress is set to enact largest NPS expansion in decades. #SecretSanta

Expanding commitments to @NatlParkService while our existing treasures decay is a microcosm of why we are $18 trillion in debt.

Coburn’s office did not respond to The Daily Signal’s request for comment.

In his statement, Cruz criticized “self-serving politicians” for trying to “exploit” the annual defense authorization and called on colleagues to reject the current draft:

[A]t a time where jobs are scarce and the federal government has removed billions of acres of land from productive use, Congress should not be restricting more than a half-million new acres.

Four federal agencies — the Bureau of Land Management, the Forest Service, the Fish and Wildlife Service and  the National Park Service — oversee the more than 640 million acres owned by the government.

In a commentary for The Daily Signal, Michael Needham, chief executive officer of Heritage Action for America, and Steven Bucci, a former Pentagon official who oversees defense policy at The Heritage Foundation, say including such non-military measures in the National Defense Authorization Act sets a dangerous precedent. They write:

If such actions continue, there will gradually be less focus on the important defense-related policies in the NDAA and more scrutiny of these sorts of extraneous provisions, threatening the entire defense authorization.

Bucci and Needham, noting that Congress consistently has passed the authorization every year for the past 50 years, call on lawmakers to continue the tradition of using it to address defense-related programs only.

“That means treating the NDAA with the seriousness that it deserves, not as a legislative Christmas tree for Congress to ornament with unrelated pet projects,” they write.

In an interview with The Daily Signal, Bucci stressed that the NDAA is not the appropriate vehicle for the provisions.

“This is absolutely the wrong time to begin using the NDAA as a pork vehicle,” he said. “The military is already in trouble due to budget cuts. Readiness is down, modernization and repair are on hold, all of which lowers our ability to defend U.S. interests. The non-defense provisions might be worthy, but they have no place inside this bill.”

In a related move, the legislative action committee of Concerned Women for America came out against inclusion of the National Women’s History Museum. The group’s president, Penny Nance, said:

By sneaking this item into the NDAA, members of Congress are put in the no-win situation of voting for our military, yet voting against an accurate portrayal of women.

Nance and 50 other women — including state representatives nationwide — sent a letter to lawmakers in April opposing the museum.

While Cruz, Coburn and other conservative senators push back on the current draft of the defense authorization, top lawmakers on the Senate Armed Services Committee defend it.

Sen. Jim Inhofe, R-Okla.,  ranking minority member of the panel, said he disagrees with including the land provisions but urges passage.

“It’s outrageous,” Inhofe told The Hill. “I dislike it just as much as anybody else. But you have to have a bill. That’s what people lose sight of.”