Could You Go to Prison for Posting Rap Lyrics on Facebook? 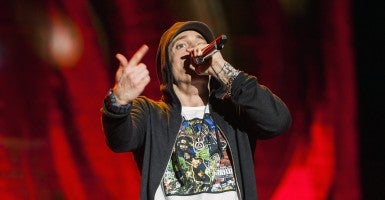 Anthony Elonis says his Facebook posts were inspired by rappers like Eminem (pictured here) and that writing the rap lyrics was therapeutic. (Photo: Ashley Landis/Newscom)

When do rap lyrics cross the line and become threatening speech?

The Supreme Court specifically addressed that question during oral arguments this week in Elonis v. United States, a case which involves the felony conviction of Anthony Elonis for making threats against his estranged wife and law enforcement officers on Facebook.

After separating from his wife, Elonis began writing a series of rap lyrics on his Facebook page to vent his frustration. Many were vulgar and contained what his wife viewed as threats against her life. One such post read:

There’s one way to love ya, but a thousand ways to kill ya,

And I’m not going to rest until your body is a mess,

Soaked in blood and dying from all the little cuts.

Elonis asserts these Facebook posts were inspired by rappers such as Eminem and that writing the rap lyrics was therapeutic. The authorities and his estranged wife viewed these posts as serious threats, and Elonis was charged with transmitting in interstate commerce communications containing threats to injure another person in violation of 18 U.S.C. § 875(c).

For the federal government to secure a conviction, it must prove two things: 1) that the speaker made a voluntary statement, and 2) that a reasonable person would view the statement as threatening.

It is this standard that forms the crux of the dispute between Elonis and the federal government. Elonis claims that although he intended to post the statements on Facebook, he did not intend for them to be threatening. He is asking the Supreme Court to rule that, to be convicted of this offense, the government must prove that he subjectively intended to make a threat, not just that a reasonable person would have found such statements to be threatening.

Under the government’s theory, once it proves that a defendant knowingly made a statement that was arguably threatening, the focus then shifts to the effect on the listener and whether the listener reasonably believed the statement was threatening, not on the intent of the person making the communication.

The distinction is an important one, since the use of an objective standard could result in a defendant going to prison for speaking or writing words he assumed were harmless but which were perceived by others as a threat.

Despite the very real problem of true threats in society, courts must carefully distinguish protected speech from statements meant to inflict fear or harm, and on that question, the Supreme Court will hopefully provide some guidance.

As former Justice Sandra Day O’Connor reminded us in Virginia v. Black, the last Supreme Court case to address the doctrine of true threats, “The hallmark of the protection of free speech is to allow ‘free trade in ideas’—even ideas that the overwhelming majority of people might find distasteful or discomforting.”