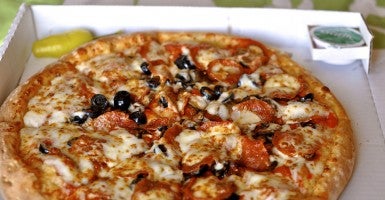 A union operative generously praised New York Attorney General Eric Schneiderman when he announced he was taking a Papa John’s pizza franchisee to court on behalf of workers who claim they were underpaid. The state attorney general, like the unions, called it “wage theft.”

The thing is, the union official knew about the government’s lawsuit before the pizza franchisee did.

“Fast-food workers all across the city and country are organizing for higher pay and union rights,” said Kendall Fells, organizing director for Fast Food Forward, a group dedicated to increasing wages and benefits for fast-food workers. Fells added:

This suit shows why their campaign is so important. And it shows that Attorney General Schneiderman is serious about holding fast-food companies accountable for wage theft.

Fells’ comments came in a press release from Schneiderman’s office announcing the lawsuit.

That means Fells, also on the payroll of the Service Employees International Union, knew New York’s attorney general was going after the Papa John’s franchisee before its owner, Ronald Johnson, did. Schneiderman’s press release also quotes Fells as saying: “Workers who make the minimum wage, or even the lower tipped minimum, cannot afford to have their employers stealing from their paychecks.”

To some, this smacks of cronyism and calls into question the nature of the relationship between government officials such as Schneiderman, a Democrat who took office in 2011, and “worker centers” such as Fast Food Forward that are backed by the Service Employees International Union, or SEIU.

To get answers, Nathan Mehrens, president of Americans for Limited Government, a free-market think tank and advocacy group,  filed a Freedom of Information Act request with Schneiderman’s office just days after the press release.

“We’d like to know what the relationship is between the AG’s office and outside groups to see if they had any prior knowledge of the suit,” says Mehrens, who was a lawyer in the U.S. Labor Department under President George W. Bush.  Mehrens adds:

Under the First Amendment, anyone can bring complaints and tips to the AG. But we don’t think it’s proper for someone to have foreknowledge of what kind of litigation might be taking place. With the IRS, for instance, there is a very clear statute that says its agents are not allowed to talk about investigations.

Schneiderman previously served in the New York Senate from 1998 to 2010. Donations from organized labor made up the second-largest category of his campaign givers, according to Vote Smart.

So far, Americans for Limited Government has not received a response.

Schneiderman’s office did not return a call from The Daily Signal seeking comment on its relationship with Fells and his union. Papa John’s also declined to comment for this report.

They are basically out to unionize the fast-food work force and to campaign for a minimum-wage increase. They are targeting non-union companies and applying pressure. What we are seeing in New York and other parts of the country is an effort to use government as an organizing tool for unions.

Since the turnover rate is relatively high for fast-food workers, it’s not likely most will see substantial benefits from union representation after paying initiation fees, Manning argues. Today, about 200 worker centers are active across the country compared with about five in 1992, according to a report by the National Legal and Policy Center, a nonprofit research group that monitors the ethics of public officials—especially supporters of organized labor.

The increase may be related to the overall decline in union membership, the report suggests.

In the late 1950s, about one-third of all non-farm workers in America belonged to a union. By 2010, union membership had dropped to 11.9 percent overall and 6.6 percent among private-sector workers.

“There’s no question that the SEIU has set up these worker centers with an eye toward reinvigorating union membership,” Manning says.

Fast Food Forward is part of a larger network that is in many respects a reincarnation of the controversial Association of Community Organizations for Reform Now, better known as ACORN.

ACORN was an umbrella group for left-leaning activists until it was exposed by undercover filmmaker James O’Keefe and others for apparent voter fraud and financial misappropriation.

The group disbanded in 2010 when, abandoned by public and private funders, it filed for bankruptcy. However,  many ACORN activists now work for other organizations as part of a national campaign to raise the minimum wage for fast-food workers to $15 an hour.

Matthew Vadum, a senior editor with Capital Research Center, has kept tabs on the reloaded ACORN organizations, which include New York Communities for Change. That group is tied to the Fast Food Workers Committee, the union counterpart to Fast Food Forward, and to the service workers union.

Americans for Limited Government documented what it describes as the “worker center shell game” among union and other activists who are part of New York Communities for Change.

In fiscal year 2013, the service workers union gave more than $1.8 million to the Fast Food Workers Committee, which has the same Brooklyn address as New York Communities for Change. That entity, in turn, gave more than $1.6 million to New York Communities for Change—an amount representing nearly 85 percent of all the group received during the year.

ACORN’s abuses of the public trust were so grievous that Congress denied them funding and shut them down. Now, SEIU is recycling these same bad apples, hoping no one notices that their effort is nothing more than a rotten-to-the-core extortion scheme.

Another key player is the Restaurant Opportunity Center. Technically not a union but a charitable nonprofit, ROC-NY initially helped restaurant workers displaced by the 9/11 attacks but since has morphed into a vehicle that challenges corporate policies.

ROC-United, the parent organization of ROC-NY, was awarded a $275,000 Susan G. Harwood Training Grant from the  Labor Department in 2010.  The grant is supposed to be limited to 501(c )(3) nonprofit educational groups, but ROC-United was a 501 (c)(4) at the time and so allowed to lobby extensively.

Jonathan Westin, now a communications director with New York Communities for Change, used to be an operative for ACORN—a link that Manning says appears to violate the congressional ban on ACORN funding.

“This is a situation we are closely tracking,” he says.

Mehrens, president of Americans for Limited Government, suggests it’s time for such organizations such as the Restaurant Opportunity Center to call themselves what they are:

The ROC does not consider itself a union, but it really is as far as I’m concerned. If it’s an organization that represents employees to an employer, then it’s a union and in my opinion it should file an LM-2 [Department of Labor union declaration and finance] form.

Papa John’s isn’t the first restaurant chain to wind up in the crosshairs of New York’s attorney general.

In March 2013, Schneiderman reached a settlement with six Domino’s Pizza franchises for not paying minimum wage, overtime or vehicle expense reimbursements to drivers and also extracted $500,000 for mostly minimum-wage workers at McDonald’s restaurants operated by the Cisneros Group.

Future such actions won’t happen in the dark, though, if Americans for Limited Government can help it.

In early November, the group filed a new series of Freedom of Information Act requests with the U.S. Equal Employment Opportunity Commission. Those requests seek EEOC communications with Saru Jayaraman, co-director and co-founder of ROC-United, and with Fells, the Fast Food Forward organizer.