In Time for Thanksgiving, Obama White House Serves Up 3,400 Regulations 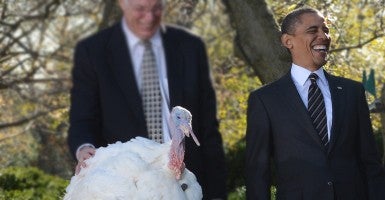 It's not clear whether any of the thousands of new rules would apply to turkeys like the one President Obama pardons here in 2012. ((Photo: Newscom)

Just before the Thanksgiving holiday, the White House quietly released word that it has 3,400 regulations in the pipeline for next year.

For those who’d like to check out the Obama administration’s proposed new government red tape, released Friday, it’s called the Unified Agenda.

“The administration has been really aggressive on the regulatory front,” Sam Batkins, director of regulatory policy at American Action Forum, a conservative policy institute, told The Daily Signal. “They drop [the Unified Agenda] on a Friday right before a holiday, and no one critical of their regulatory policies will have a chance to criticize it.”

The Unified Agenda serves as the administration’s roadmap for regulations it intends to finalize in coming months.

Over the past six years of the Obama administration, the cost of complying with new government rules has averaged $16 billion per year.

“While these are not the highest totals we’ve seen during the Obama administration, they continue to be higher than in past administrations,” James Gattuso, senior research fellow in regulatory policy, told The Daily Signal.

In 2012, the Obama administration had more than 4,000 regulations in the pipeline. That number decreased in 2013 but went up again by about 100 this year, he said.

Though 3,400 is not the record, it is still a substantial amount, Gattuso noted.

Under the Clinton and Bush administrations, Batkins said, the Unified Agenda typically was a “normal, boring list of regulations” released each fall and spring.  He said the Obama administration’s penchant for releasing new regulations near the holidays shows it views it “as a politically charged document.”

The latest agenda includes 23 new “economically significant” rules–those with estimated economic impact of $100 million or more per year. That’s up from 21 in last year’s agenda.

Those rules, as Batkins said, are the “big-ticket items.”

Additionally, the Consumer Product Safety Commission plans to issue flammability standards for upholstered furniture that could cost more than $100 million.

Also to be finalized next year is the EPA’s set of rules to limit greenhouse gas emissions from coal-fired power plants.

Batkins said of the agenda:

The mounting regulations issued by the Obama administration has been a source of contention for many Republicans, particularly in states that look to coal production as a boon to the local economy.

“It’s time for more listening and less job-destroying red tape,” Senate Minority Leader Mitch McConnell, R-Ky., said. “Easing the burden created by EPA regulations will continue to be a priority for me in the new Congress.”

In a March report from The Heritage Foundation, regulatory policy experts James Gattuso and Diane Katz found that the Obama administration issued 157 major regulations during the president’s first five years in office. For the same period under President George W. Bush, the government issued 62 major regulations.

According to the American Action Forum, the $16 billion annual average for compliance costs is “tantamount to having a $160 billion tax increase over 10 years.”

About $18 billion to $20 billion in new regulatory costs is the equivalent of a 1 percent increase in the payroll tax, Batkins told The Daily Signal:

Payroll tax going up 1 percent — that would get everyone interested. But $20 billion in regulatory costs is the equivalent of that.