Media, Democrats Called Out Bush, Reagan on Abuse of Executive Power. Where Are Their Voices Now? 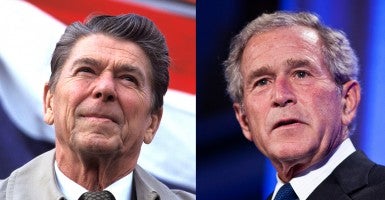 Republicans are rightly and predictably infuriated by Barack Obama’s immigration executive action power play. What has been remarkable has been the silence from the left to President Obama granting legal status to some 5 million illegal immigrants. Such Nixonian abuses of White House power once elicited howls of protest from Democrats and their lap dogs in the media.

But in this case of Obama defying voters, Congress and the Constitution in one fell swoop, the left has drifted between quiet unease and full-throttled support.

This is the same crowd that seethed with outrage over the much more defensible use of executive orders and actions by Presidents Ronald Reagan and George W. Bush. With a Republican in the White House, the media’s exhortations about constitutional limits on presidential power, the proper role of Congress and the danger of concentrated authority were aplenty.

Reagan confronted these objections right from the start. Mere months after the start of Reagan’s first term, Rep. Richard Bolling, D-Mo., chairman of the House Rules Committee, derided him as “the third imperial president with whom I’ve dealt and opposed.” Reagan’s misdeed consisted of pushing forward a growth-based economic agenda–an agenda implemented with congressional approval.

When Reagan committed troops to Lebanon, Anthony Lewis declared in 1984 in The New York Times that, “The imperial Presidency is on the rise again.” Lewis cautioned, “As before in history, the delicate balance at the heart of our Constitution is under threat. That is the balance of powers among the three branches of the Federal Government: the concept that the Framers saw as the fundamental guarantee of American liberty.”

President Reagan’s Cold War dictates were also regularly condemned.  In trying to turn back the Sandinistas in Nicaragua, The New York Times in 1985 wailed, “The imperial Presidency is back. President Reagan will agree to live with a troublesome Nicaragua only if its leftist rulers will surrender.”   The Times reminded the nation that “Americans still elect a Congress, too…”

The then-esteemed White House correspondent Helen Thomas proclaimed of Reagan: “The imperial presidency is back in the Reagan administration,” she announced in 1985 when describing the “imperial trappings” at a Bonn economic summit.

The most sustained complaints about executive branch power grabs were reserved for George W. Bush during his two terms in the White House.

Senate Majority Leader Harry Reid declared in a Senate floor speech in 2006: “In matters ranging from domestic spying to the use of torture, the current president has effectively declared himself above the law.” But he has shown no such reservations about the Obama power play.

The late Sen. Robert Byrd, D- W.V., fumed, ”Never, in my view, had America been led by such a dangerous head of state.” He bemoaned that America was being misled by ”a reckless and arrogant presidency.” Byrd was talking about Bush, but one wonders what this defender of Congress would have thought of this president.

Leading up to the 2008 presidential election, the editorial board of the Los Angeles Times also piled on Bush, warning readers that “Bush has transformed the balance of power in our government. We are seeing the erection of an imperial presidency, immune from oversight when it fights terrorists and when it rescues banks.”

In theory, Democrats and the media wanted Obama to be different than Bush.

When Obama was elected, that same editorial board of the Los Angeles Times admonished, “With his imperial presidency, Bush diminished Congress and the courts. Humility and modesty are guiding principles that befit a great power and a great leader. Bush has paid lip service to those ideals; Obama must honor them in fact, not merely in word.”

House Judiciary Chairman John Conyers, Jr., D-Mich., expressed “hope” for the Democratic administration. His committee published “Reining in the Imperial Presidency: Lessons and Recommendations Relating to the presidency of George W. Bush.” In the report, Conyers gravely wrote, “It is my hope that these recommendations will help to ensure that President Obama follows through and rolls back those excesses, and restores the checks and balances that have made our nation strong.”

How has that worked out? Under Obama’s Department of “Justice”, the Internal Revenue Service engaged in politically motivated targeting of charitable groups, implemented the Fast and Furious gunrunning scandal and collected telephone records on Associated Press journalists without a warrant. So much for the rule of law.

So egregious have the president’s actions been that the Supreme Court unanimously rejected his overreach 20 times. The Court struck down as unconstitutional the president’s efforts to apply federal employment law in private religious schools, to make illegal recess appointments and to search cell phone records without a warrant. In addition, the Court ruled against the administration’s efforts to seize private property without just compensation under the guise of environmental protection, to prosecute citizens even after the statute of limitations expires and to attach GPS monitoring devices to vehicles without a warrant.

Yet, as in these cases and in the latest immigration proclamation, the media in large part refuses to condemn the naked power grab.

These legal cases (which the president lost) don’t even address the matter of the president simply choosing not to enforce laws which he personally does not agree with. In fact, this president has encouraged health insurers to actually violate his touchstone project, the Affordable Care Act, by offering policies deemed illegal by this signature act. Imagine if a president chose to suspend income taxes for certain people or attempted to deny entitlement benefits to others.

The left makes the case that Obama has issued fewer executive orders than George W. Bush. This talking point is highly misleading as it ignores the fact that the Bush orders mostly dealt with national security issues pertaining to his role as commander-in-chief. And it ignores the fact that the count of “executive orders” only includes published presidential directives – not the myriad of other discretionary actions. Obama uses both executive orders and executive actions to transform American society: on health care, welfare and now immigration.

To the left, the rule of law is arbitrary. It apparently applies to Republicans, not Democrats – evidently because they are on a righteous mission.  And so to the left an imperial president – who invents new executive branch powers and asserts that he is above the law – isn’t such a bad thing when voters have elected a Republican Congress and the emperor in the White House is a Democrat.