MSNBC Shrill Is No Accident. It’s How Liberals Really Think. 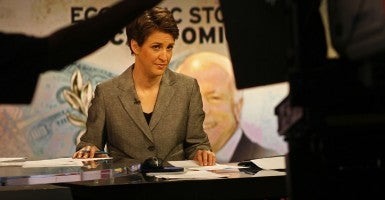 William Voegeli, a senior editor of the Claremont Review of Books, is the author, most recently, of The Pity Party: A Mean-Spirited Diatribe Against Liberal Compassion.

Since then, things have only gotten worse. At the dawn of the Obama era, for example, Mark Schmitt, former editor of The American Prospect, wrote that the “conservative power structure” is so “dangerous” because it operates “almost entirely on bad faith,” thriving on “protest, complaint, [and] fear.” Just before the recent midterm elections The Daily Beast’s Michael Tomasky called the GOP “as intellectually dishonest and bankrupt and just plain old willfully stupid as a political party can possibly be,” one whose only agenda “is to slash regulations and taxes and let energy companies and megabanks and multinational corporations do whatever it is they wish to do.”

In other words, it is impossible not only for any reasonable person to be conservative, but even to take such idiotic, malignant ideas seriously. And neither Schmitt nor Tomasky is a particularly shrill partisan, compared to the polemicists at Salon.com, MSNBC or the New York Times editorial page. With such allies, it’s no wonder that Barack Obama’s wish for a new political unity that would transcend and heal the divisions between red states and blue states has come to nothing.

Liberal rhetoric emphasizes compassion, empathy and kindness—“Kindness covers all of my political beliefs,” President Obama has said—because these emotions need not and really cannot be theorized.

It’s tempting, but mistaken, for conservatives to think that the problem is as simple as liberals’ failure to observe the Golden Rule of democratic politics: take your adversaries as seriously as you want them to take you. That’s a good standard, of course, but it’s sound advice for everyone. American discourse would benefit if all disputants observed what economist Bryan Caplan calls the “ideological Turing test,” which requires characterizing a viewpoint you disagree with so discerningly and scrupulously that an adherent of that position finds your summary of it as clear and persuasive as any provided by a true believer.

Caplan’s test turns out to be not only a good general rule, but a good way to grasp one of liberalism’s defining features. It’s hard to understand liberals as they understand themselves because they insist there’s really nothing to understand. Liberal rhetoric emphasizes compassion, empathy and kindness—“Kindness covers all of my political beliefs,” President Obama has said—because these emotions need not and really cannot be theorized.

Even its philosophers reject the need for a theoretical framework. “The idea that liberal societies are bound together by philosophical beliefs seems to me to be ludicrous,” the left-of-center philosopher Richard Rorty contended. Philosophy “is not that important for politics.”

2011 tweets from Alec Baldwin (via The Blaze)

Liberalism, as liberals understand it, is not a philosophy, ideology, body of doctrines or a mode of interpreting political reality. It is, instead, nothing more than common sense and common decency applied to the work of governance.

Convinced that no intelligent, decent person could take conservatism seriously, liberals believe it is not necessary or even possible, when engaging conservative ideas, to go beyond diagnosing the psychological, moral or mental defects that cause people to espouse them. Liberals claim to understand conservatives better than they understand themselves on the basis of seeing through the cynical self-interest of conservative leaders (and funders), and the fanaticism or stupid docility of conservative followers. The New Yorker’s Jane Mayer, scourge of the Koch brothers, went on Rachel Maddow’s MSNBC show in 2010 to deny that the Tea Party movement was “a spontaneous uprising that came from nowhere.” In fact, Maddow explained, many of those attending its demonstrations “were essentially instructed to rally against things like climate change by billionaire oil tycoons.”

This condescension has always been part of the liberal outlook. In 1972, eight weeks after George McGovern suffered a historically massive defeat against Richard Nixon, film critic Pauline Kael told the professors at a Modern Language Association conference, “I know only one person who voted for Nixon. Where they are I don’t know. They’re outside my ken. But sometimes when I’m in a theater I can feel them.”

Conservatives will wait decades in the hope of a fair hearing from such adversaries. That time would be better spent urging Americans who haven’t made up their minds that the same traits that make liberals contemptuous of conservatism make them dangerous for America. Liberalism exists to solve problems, and liberals regard every source of dissatisfaction or discord as a problem, not an aspect of the human condition that we must always contend with but can never sanely hope to eradicate. In denouncing “Dirty Harry” as a “deeply immoral movie,” Pauline Kael explained in 1972 that crime is caused, not by evil, but by “deprivation, misery, psychopathology and social injustice.”

Yet the crime wave that made urban life intolerable from the early 1960s through the early 1990s has, somehow, receded dramatically, even though liberals are as agitated about deprivation and social injustice today as they were 40 years ago. Such reactionary ideas as more cops, more prisons and longer sentences—all based on the conservative belief that constraining human wickedness through stern disincentives is plausible, but solving it therapeutically through social work is deluded—has made the difference. Liberal disdain for the wary view of human nature, which is conservatism’s foundation, turns out to be of one piece with the “idealism” and “compassion” that culminates in governmental malpractice, rendering liberalism a threat to the American experiment in self-government.