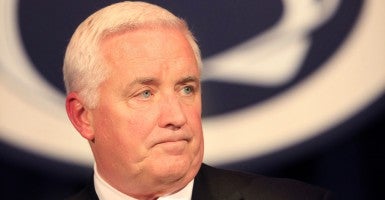 For months on end, Democrats crowed that voters were going to toss Kansas Gov. Sam Brownback and his tax-cutting agenda out of office on Tuesday. He was pounded in the media for the evident sin of following the Laffer-Moore model of income-tax rate reductions to stimulate growth and prosperity. This reform was denounced as a failure and “trickle-down economics.” Voters don’t want tax cuts, The Kansas City Star, The New York Times and others hollered hopefully.

Except it didn’t turn out that way. Not at all.

Brownback and his tax cuts survived (albeit narrowly). The real message sent on Tuesday was precisely the opposite of what the critics hoped. Brownback won while his tax-hiking neighbor, Democratic Gov. Pat Quinn in Illinois, was thrown overboard by voters.

Tax-cutting governors such as Scott Walker in Wisconsin, Rick Scott of Florida, Mary Fallin of Oklahoma, John Kasich of Ohio and Rick Snyder of Michigan, to name a few, joined Brownback and all won—mostly by big margins. The governors who got tossed out of office this week or where party control changed were in the tax-hiking states. Democrats lost not just in Illinois, but in Massachusetts and Maryland, too—all deep-blue states where income taxes went way up. The only Republican across the country who lost this week was Tom Corbett of Pennsylvania. He infuriated conservatives by raising gas taxes.

The Brownback win is special salt in the wounds to the left, the media and the teachers unions. Liberals had attracted millions of outside dollars into Kansas to deny the governor and former senator a second term. The Kansas City Star ranted day after day that Brownback (and I) were “lying” for trumpeting the success of the tax-cut agenda. He won by promising to move forward with his goal to eliminate the state income tax entirely.

The real tax revolt was in Illinois. The Land of Lincoln was supposed to be a showcase for how loading up taxes on the rich could rebuild a state economy. As the union bosses cheered, Quinn pushed through the biggest income tax in Illinois history, raising the personal income tax to 5 percent from 3 percent and the corporate tax to nearly the highest in the nation.

It didn’t work. The state is still in lousy financial shape with massive unfunded pension liabilities. The bond rating has been downgraded multiple times. The rate of job growth in the Land of Lincoln is the slowest in the Midwest and behind much-maligned Kansas. Quinn is gone.

The tax-hiking agenda fared poorly on the ballot all over the country. In Nevada, voters rejected a new 2 percent business margins tax to fund schools. In Tennessee, voters approved a constitutional amendment banning the legislature from implementing an income tax and Georgia voters capped the income tax. Massachusetts voters banned automatic gas-tax hikes.

The move to cut and cap income taxes is rooted in solid science. As Arthur Laffer, Travis Brown, Rex Sinquefield and I show in our book, “The Wealth of States,” low and no income-tax states substantially outperform high income-tax states. Just look at the job-creation rate, which has been two to three times higher in Texas and Florida, where there is no income tax, versus New York and California, where the income tax can reach 13 percent.

Alas, in these states, voters countered the national trend. Gov. Jerry Brown won big in California after raising taxes, as did Andrew Cuomo in New York.

But they are dancing on a thin sheet of ice. I suspect voters don’t want more taxes, because they don’t think the money will be spent wisely by politicians. Voters seem to understand that trying to tax a state to prosperity is a fool’s errand. The media and political pundits who said that Brownback was a dead man walking still don’t get it. They were big losers on Tuesday, too.