Lame-Duck Congress Must Renew Its Commitment to Missile Defense 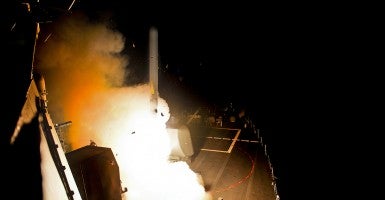 As Republicans enjoyed remarkable gains on Election Day, capturing control of the Senate and tightening their grip on the House, a palpable shift in the prevailing power structure overcame Washington.

Although the Republican Party won’t actually take control of the Senate until January, a number of important issues will demand more immediate consideration.

Among the issues that continue to persist is the ongoing threat posed by the Islamic State and its acolytes. The threat from a lone-wolf attack has only increased as the Islamic State continues to urge its cyber-adherents to take on domestic law enforcement and military personnel.

And although the Obama administration has been quick to promote the movement toward a negotiated nuclear agreement with Iran, the threats posed by its government endure.

On Nov. 4, thousands marched in Tehran, chanting “Death to America” and condemning the U.S.-led sanctions against Iran. The rallies against the United States were in part a celebration of the 35th anniversary of the Iranian takeover of the American embassy in Tehran in 1979.

Moreover, Iranian Foreign Minister Javad Zarif stated, “Iran is ready to ink a comprehensive nuclear accord with the six major world powers if the Islamic Republic’s nuclear rights are recognized.”

Additionally, the bellicose and inscrutable leader of North Korea, Kim Jong Un, reminds us of the unpredictability of his isolated and nuclear-armed regime.

This news comes in the wake of statements made by the commander of U.S. forces in South Korea that Pyongyang may have achieved the ability to miniaturize nuclear warheads, a key step in the process of producing a nuclear weapon capable of being launched via an intercontinental ballistic missile.

“I believe they have the capability to miniaturize the device at this point, and they have the technology to potentially actually deliver what they say they have,” Gen. Curtis Scaparrotti of the U.S. Army stated.

In addressing these myriad threats, especially those posed by rogue nations and their unpredictable leaders, Congress and the Obama administration must remain committed to a robust missile defense apparatus capable of protecting American assets at home and abroad.

Missile defense continues to be the greatest deterrent and most effective countermeasure against the threat of ballistic missiles.

Assets such as the Ground-based Midcourse Defense system, which uses advanced radars and ground-based interceptors outfitted with an exoatmospheric kill vehicle, provide the capability to intercept long-range ballistic missiles in space. GMD, along with the sea-based Aegis Ballistic Missile Defense System, remain at the vanguard of America’s anti-ballistic missile arsenal.

With the current continuing resolution set to expire on Dec.11, the now-lame-duck, Democratic-controlled Senate soon will have to address the nation’s budget.

Given the precarious state of global affairs, now is not the time to equivocate on fully supporting missile defense. Ensuring the American homeland and all allies and assets abroad remain secure requires a commitment to fully funding the necessary components that, when integrated, comprise the most efficient bulwark against a variety of threats.

Power may be shifting in Congress, but it is the responsibility of all members, irrespective of party affiliation, to address the ongoing security needs of the nation.