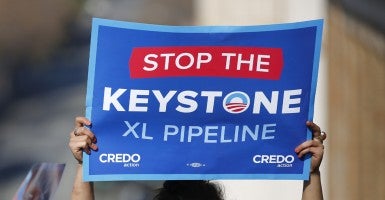 'I believe it is time to act': Louisiana's embattled senator is ready for a vote on the Keystone XL oil pipeline. (Photo: Newscom)

On the heels of bruising losses in the midterm elections, Senate Democrats are pushing for a vote on the Keystone XL oil pipeline, a measure stymied for years by the Obama administration.

“It has been 600 days since 62 senators signaled their support for constructing the Keystone XL pipeline and only now is Senator Landrieu putting her foot down,” said Dan Holler, communications director for Heritage Action for America, the advocacy arm of The Heritage Foundation. “Demanding a vote now, in the midst of a runoff, is pretty blatant and everyone gets the joke.”

Recent polling shows Landrieu, whose father served as mayor of New Orleans and whose brother is mayor now, trailing her Republican opponent by about five percentage points.

In Louisiana’s Nov. 4 “jungle primary,” Landrieu took 42 percent of the vote, followed by Cassidy with 41 percent and Rob Maness, also a Republican, with 14 percent. Senate Democrats are pushing for a vote on the Keystone XL pipeline and Sen. Mary Landrieu of Louisiana is leading the charge. (Photo: A.J. Sisco/Newscom)

Today on the Senate floor, Landrieu pitched her support for the Keystone pipeline as a key difference between her and President Obama; her strong support for him on most other issues continues to plague her bid for a fourth term.  She said:

I believe it is time to act. I believe that we should take the new majority leader at his word and stop blocking legislation that is broadly supported by the American public and has been for quite some time.

TransCanada’s Keystone XL oil pipeline – proposed to run from Alberta, Canada, to the Gulf Coast of Texas — has been one of the biggest bones of contention between the Obama administration and lawmakers in both parties.

In an effort to distance herself from Obama, Landrieu called for the unanimous consent of the upper chamber on a bill to approve Keystone sponsored by Sen. John Hoeven, R-N.D. The Louisiana Democrat, as part of a bipartisan coalition of 27 senators, co-sponsored the legislation.

Barely a week after Republicans won back the Senate majority and expanded their power in the House, party leaders have made it known that they intend to vote on the oil pipeline, among other bills, early next year — after the newly elected Republicans take their seats.

“These types of common-sense solutions, so long ignored by the outgoing Senate majority, offer a good starting point,” Speaker John Boehner said in the Republican weekly address Saturday. “They’ll help break the logjam here in Washington and establish a foundation of certainty and stability that both parties can build on.”

The Senate is expected to vote Tuesday on Hoeven’s bill authorizing the Keystone XL pipeline.

Cassidy, a Republican congressman from Baton Rouge seeking to unseat Landrieu, announced his intention to introduce his own Keystone bill tomorrow, hoping to pressure the Senate to push the issue forward. Cassidy’s bill is identical to the Senate legislation.

In a press release, Cassidy said:

The House has passed legislation to expedite the construction of the Keystone XL pipeline eight times. It is easy to wonder if the Senate is only considering this because of politics; even so, I hope the Senate and the president do the right thing and pass this legislation creating thousands of jobs.

Nicolas Loris, an expert in energy policy at The Heritage Foundation who has written extensively on the oil pipeline, criticized the latest political calculus.

>>> Commentary: What the Left’s Scare Tactics on Keystone Pipeline Get Wrong

The State Department has conducted multiple environmental reviews, concluding that the pipeline would be safe and not contribute significantly to climate change. TransCanada first announced it wanted to build this project in January 2008. Six years later, we still need the energy, the jobs and the economic activity.

The southern leg of the pipeline, spanning from Oklahoma to Texas, already has been completed. The U.S. government has yet to approve the northern leg, which would run from Alberta to Nebraska.

Republicans and Democrats in both chambers have come out in support of Keystone. In March 2013, when the Senate held a symbolic vote to measure backing, 62 senators approved of it and 37 dissented.

Although Republicans in both the House and Senate introduced bills to approve the pipeline, Majority Leader Harry Reid, D-Nev., has refused to take up any bill. Reid’s Republican counterpart, Sen. Mitch McConnell of Kentucky, is expected to be elected to replace him in January.

Maintaining the need for a full review of the project and its environmental impacts, Obama irked Republicans and fellow Democrats alike by stalling attempts to move it forward.

The State Department and Environmental Protection Agency have reviewed the pipeline project for six years.