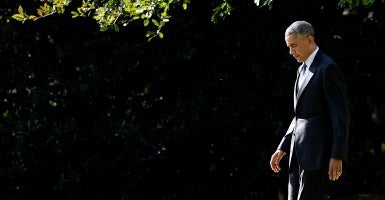 President Obama made life a bit more difficult today for Tom Wheeler, the chairman of the Federal Communications Commission.

In an unusually deep wade into the decision-making process at the supposedly independent FCC, the president came out in favor of imposing common carrier regulation on America’s Internet service providers, saying in a video released by the White House: “I believe the FCC should reclassify consumer broadband service under Title II of the Telecommunications Act.”

Obama went on to declare his support for an outright ban on what is called “paid prioritization,” under which providers of Internet content could pay for premium service in the delivery of their material to consumers.

Both of these steps present threats to the free and open Internet we enjoy today, and to its growth in the future. Regulating the 21st century Internet under common carrier rules designed for the railroads in the 19th century simply makes no sense. With a stroke of a pen, the networks connecting millions of Americans to the web would be subject to thousands of regulations, requiring them to obtain FCC permission for the most basic of decisions. The nimble Internet we know would be slowed to the speed of government and the innovation level of a local water company.

The president’s call for an outright ban on paid prioritization, often referred to as Internet “fast lanes,” also is troubling, if not surprising. In comments last month, he criticized “the notion that some folks can pay a little more and get better service…”

But premium pricing is a routine practice in most markets. From airline travel to theater tickets to package delivery, premium service offerings are an established, and essential, part of the business.  Even on highways themselves, “HOT lanes” are an increasingly welcome option for consumers.

Although past administrations have hesitated to interfere with the FCC’s independent status, the White House today was far more direct, stating “the president has laid out a plan to do it [regulate] and is asking the FCC to implement it.”

In any case, Obama’s statement today creates more than a few problems for Wheeler. In recent months, he has been riding a tiger, trying to reconcile demands by pro-Title regulation extremists on the far left and those advocating regulating under the current framework, and between those calling for a “fast lane” ban and those who would have the FCC review practices on a case-by-case basis. By stepping in, Obama has reduced the chances that Wheeler will be able to negotiate compromises to bridge the gap among supporters of regulation.

That leaves the possibility that the FCC won’t be able to act at all to impose regulation. That might be the best outcome of all.