Let’s Get Together, Yeah, Yeah, Yeah: What Obama and a GOP Congress Can Do on Foreign Policy 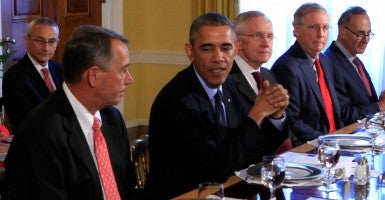 Breaking news! The fate of the world doesn’t hang on the outcome of an American midterm election. The make-up of the new Congress might make it easier for President Obama to tack toward a more responsible foreign and defense policy, but that’s not likely to happen. The major flaws of American foreign policy arise from the White House—and the elections forced no change there. The more probable post-election scenario is that Obama’s summer of chaos, which turned into the autumn of awful, becomes a winter of discontent for all Americans.

The new Congress appears as though it would be up for real change in foreign and defense policy. Leadership in both houses would likely sign up for rebuilding military capabilities instead of drawing them down. The new Congress would also willingly push for a free-trade agenda and free-market energy policies. And it would endorse a tougher approach in dealing with Iran, ISIS, Russia, the Taliban and China. Members would line up for initiatives like bolstering support for Taiwan, including a more aggressive arms package.

But the president has three problems.

One: He isn’t eager to do anything more on foreign and defense policy than he is already doing.

Two: America’s enemies and unfriendlies believe that Obama is pretty much a lame duck on foreign affairs. They’ve figured out how to run around the Obama Doctrine. And they will interpret the midterm losses of the president’s party as reaffirmation that Obama’s power and prestige are waning.

Three: Voices opposing Obama’s policies increasingly sound quite reasonable. The president tried to define U.S. choices in foreign affairs as only three stark options: a) invade everybody, b) sit at home on your hands or c) his middle way—”don’t be stupid stuff.” What the White House has found is that others can play that game. No serious opposition voices are lining up to carry the banner of isolationism or “robust” internationalism. On the other hand, they have pretty soundly rejected that Obama’s course represents the prudent middle way—and months of horrible headlines from around the globe reinforce that notion. From Ukraine to the Middle East, from Africa to Latin America and South Asia, it’s hard to find any place where the president can point and say, “See? It’s working.”

Obama has yet to show any sign that he knows how to solve any of these challenges. So what does muddling through look like in days ahead? Here are some high-profile issues that will tell the tale.

Look for the administration to seriously press its attempt to seal a nuclear deal with Iran. The White House believes that an agreement, much like a new Israeli-Palestinian peace process, is some kind of magic bean that will cause peace to flower over the Middle East. Yet if Obama does sign a nuclear pact with Tehran, he will reap an angry rebuke from Congress. Neither chamber believes Iran will sign away its dream of a nuclear arsenal, or abide by the terms of any promise to do so. They won’t buy the line that Iran is going to make the Middle East a better place. They will complain that lifting sanctions will just give Iran more money to lavish on Assad, Hamas, Hezbollah and the Shia militias in Iraq. Friends and enemies will see such Congressional grumpiness as further proof that Obama has lost it.

In all likelihood, both chambers will want to stop cutting defense in 2016. Not only would that be prudent as a matter of national security, it’s the smart political move as well. But don’t expect Obama to do himself any favors when proposing his 2016 budget. Yes, he’ll likely propose a much higher top line for the defense budget. But, he will also bust the sequester caps on the rest of the discretionary budget. Congress will interpret this as a base political move, designed to make the members look like the “Grinch.” That will make them more, not less, grumpy.

The problem with trade and energy policy has always originated in the White House, not from their partisan supporters in Congress. Obama has consistently appropriated the rhetoric of “free trade” and wrapped it around protectionist measures. The new Congress will have little patience with that. They could well give Trade Promotion Authority to the Oval Office, but it’s unlikely the White House will be able to move either the Pacific or European trade pacts across the goal line while Obama is in office. Other countries know that, and it makes the U.S. bargaining position even weaker. The president could shift gears and push through some modest bilateral-trade pacts, but that’s not likely. There’s an outside chance Congress might twist the presidential arm and get him to sign off on liberalizing energy exports—if only so that he can take that issue off the table before the next general election.

Congress may or may not give the president an Authorization to Use Military Force against ISIS. In practical terms, it won’t matter much. Obama’s big problem now is his strategy—and Congress can’t fix that.

Congress will likely find it has to act this spring. But the bill that results won’t be a bellwether of change either way, and the White House is fine with that.

This is one issue where the Congress just might move the White House an inch. Obama has done as little as possible to help the island upgrade its defenses. But China has said “thank you” by poking the United States in the eye at every opportunity. The upheaval in Hong Kong has made everyone in Asia nervous about Beijing’s new leadership. The White House just might undertake some new initiatives with Taiwan to show it’s not afraid to push back.

The likelihood of any controversial treaty getting through the next Congress is about the same as Dwayne Johnson (aka “The Rock”) winning an Oscar.

The United States is scheduled to chair the next round of the Arctic Council. Arctic policy is increasingly important for the United States. Development of the region has significant implications for trade, energy and the environment. Look for the administration to make its tenure all about climate change. And look for Congress to be really annoyed. This will have other countries scratching their heads, wondering why U.S. leaders can’t get on the same foreign-policy page.

So much for the good news. The bad news is that other challenges, now off the radar, will pop up to bedevil the White House in the years ahead. Obama’s “just muddle through” approach won’t set the United States up well to deal with any of them. A Congress run by a party other than his own could be the least of his problems.