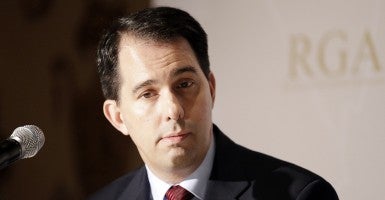 The Republican takeover of the U.S. Senate may have been the biggest election news. But the most consequential storyline resonates beyond Washington and into the heart of the country, as Americans delivered Republicans firm control of the nation’s state capitals.

Republicans picked up Democratic-held governorships in traditionally liberal states such as Massachusetts, Maryland and Illinois, and gained full power in at least eight state legislatures. The victories gave Republicans a wide palette to impart their agenda.

“States are where American policy change has been going on … and Republicans are in a much stronger position to advance their agenda.”

With President Obama vowing to pursue his agenda over the final two years of his term, Republicans are counting on states to take the lead on policymaking—far away from Capitol Hill gridlock—and actually impact people’s lives.

“There is no doubt the Republican wave leaves them in the strongest position in the states in close to 100 years, if not more,” said Tim Storey, an elections analyst at the National Conference of State Legislatures, in an interview with The Daily Signal.

“It’s hard to imagine Washington working together. I guess pigs fly maybe,” he added. “States are where American policy change has been going on for several years now, and Republicans are in a much stronger position to advance their agenda.”

The wins increased the ranks of Republican governors to at least 31 and gave the party control of 66 legislative chambers, four more than their previous record in the modern era.

Before the election, there were 29 Republican governors and 21 Democrats.

On Tuesday, preliminary results showed Republicans had won control of both the Nevada Assembly and Senate, the Minnesota House, the New Mexico House, the Maine House, the West Virginia House and the New Hampshire House.

It also gives Republicans total control of 24 states, in which they hold the governor’s mansion and both chambers of the state legislature. Democrats have complete control over six states.

Such GOP dominance was unexpected.

This year’s climate for governor seats seemed to favor Democrats, as eight Republican governors who won in 2010 were running for re-election in states Obama won twice. Democrats picked up the Pennsylvania governorship. The Alaska race, where independent Bill Walker leads incumbent Republican Gov. Sean Parnell, has not been called yet.

Different from the Senate races, Obama and national politics barely figured in the campaigns for governor.

“Voters care a lot about competence when it comes to governors.”

Popular issues such as gun control, schools, minimum wage, abortion and health care played into many of the races.

Above all, voters seemed to be moved most by uncertainty in the economy and governors’ ability—or failure—to improve their state’s fortunes.

Geoffrey Skelley, associate editor of Sabato’s Crystal Ball at the University for Virginia Center for Politics, argued as much.

“Voters care a lot about competence when it comes to governors,” Skelley said in response to emailed questions from The Daily Signal. “Even if you’re a Republican in a very red state (like Gov. Sam Brownback in Kansas) or a Democrat in a very blue state (like Gov. Pat Quinn in Illinois), if your performance is fairly poor, it can leave you vulnerable.”

Brownback, who barely beat Democratic challenger Paul Davis, earned new faith in his deeply conservative state after he faced criticism from GOP moderates for aggressive tax cuts that have contributed to a budget shortfall.

Another conservative, Walker, who is weighing a run for president in 2016, won a race where he did not retreat from his conservative principles. Walker has now emerged victorious three times (including an unsuccessful recall) in a span of four years.

The trend toward one-party control of statehouses has led to new policymaking opportunities, some controversial among voters who are more accustomed to divided government.

Overall, more states will have divided control next year, a function of Democratic losses.

“This [division] will result in more compromise and will dampen the Democratic agenda in those states,” he said.

Storey said any Republican state-level agenda would likely include conservative mainstays such as tax cuts, job creation and plenty of pushback on Obamacare, including undercutting Medicaid expansion.

High-profile conservatives laid out a similar vision in a press conference Wednesday at the National Press Club in Washington.

Ken Blackwell, a former mayor of Cincinnati and Ohio secretary of state, attributed state-level upheaval to “a need to get the economy moving again.”

He said governors’ decisions would have broader implications for the future of the Republican Party.

“Governors are solving problems on a day-to-day business,” Blackwell told The Daily Signal after the press conference. “I am among a group who believes the next [2016 GOP presidential] candidate will come from the governors’ ranks. Hopefully, they know it’s in their interest to speak up and act on issues that matter to conservatives.”