How a D.C. Airport Reacted When an Honor Flight Landed 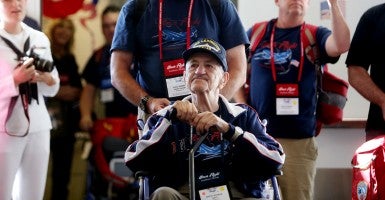 Recently I saw one of those spontaneous events that renews your faith in the patriotism and good will of the American people. It also illustrated their appreciation for the servicemen and women who have risked their lives for our nation.

It was in the C Terminal of Reagan National, one of three airports serving Washington, D.C. I had just passed through security when I saw a huge crowd of travelers gathered around Gate 38, clapping and cheering. I could hear music, too: “I’ll Be Seeing You,” a World War II standard seldom heard these days.

It turned out that an Honor Flight had pulled up to the gate and was unloading a group of veterans for a special visit to Washington. With a live band playing favorites of a bygone era and flags flying on either side of the entrance to the jetway, veterans of World War II and Korea came out of the gate. Some were walking, some rolling in wheelchairs, and others hobbling with the aid of canes or family members and Honor Flight ground crew.

Reagan National is always full of travelers rushing to catch their flights—tourists returning home after visiting the Nation’s Capital, servicemen and women from the Pentagon or nearby military installations, business travelers as well as many congressional and executive-branch officials. But today, a large number of those harried travelers spontaneously took the time to stop and show their support for these elderly Americans who have given so much for their country. For many of those veterans, this may be their last trip to Washington.

It was so emotional that many in the crowd had to reach for tissues. I’m not a sentimental guy, but I’ll admit it: I was one of them. It seemed you could almost hear the faint notes of bugles far away playing a salute to the fallen comrades of these veterans, comrades who were awaiting their arrival just down the street from Reagan National at Arlington National Cemetery.

It was an inspiring and moving moment in a fast-paced, ever-changing culture. It made me realize that at least one thing hasn’t changed in the long life of our republic: the patriotic love that everyday Americans have for our country.