Is an Ohio School District Using Public Money to Campaign? 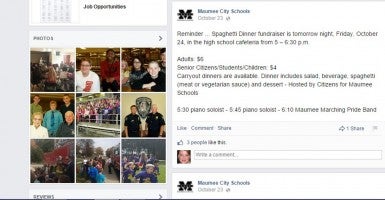 The text came from the School Messenger alert system — the one that’s supposed to be used to notify parents of an emergency or about weather delays.

But Reynolds has a problem.

Ohio schools are prohibited from using public resources to promote a campaign issue.

Reynolds said he and his wife signed up for alerts from the school, primarily so they would know about weather-related school delays. He said they’ve also received information about various school events, such as fundraisers, for the band and functions related to in-school organizations.

“This was the first time for a campaign event,” he said.

Reynolds said he followed media reports of illegal campaigning with public resources, including when Sylvania City Schools sent emails to parents asking them to volunteer for their levy efforts, so he knew the district might be wrong.

Because of those reports, he decided to check out the Maumee Schools Facebook page and found it advertised the campaign event there as well.

As of Monday morning, the post was still on the district’s official page.

Reynolds said he sent an email to all board members about the possible violation, and he hoped they would respond before the end of business Monday.

But he’s not optimistic.

“I’m expecting platitudes,” he said. “The school board has its own agenda. I approached them a while ago about doing a performance audit before they ask for more money. I was told ‘we do our own books and don’t think we need a performance audit.’”

Maggie Thurber is a reporter for Watchdog.org, a national network of investigative reporters covering waste, fraud and abuse in government. Watchdog.org is a project of the nonprofit Franklin Center for Government & Public Integrity.