US General: North Korea Now Has Nuclear Warheads for Missiles 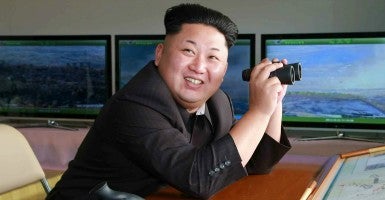 Kim Jong-un holds binoculars during his observation of an actual drill of combined military units at an unidentified location in this photo carried by the Rodong Sinmun on Oct. 24. Credit: Yonhap News/YNA/Newscom

North Korea now has the ability to produce a miniaturized nuclear warhead that can be mounted atop a ballistic missile.

That is the assessment of Gen. Curtis M. Scaparrotti, the senior U.S. commander on the Korean Peninsula, as he talked to reporters Friday. Scaparrotti also concluded that Pyongyang has a functioning long-range mobile missile launcher.

Although North Korea has conducted three nuclear explosion tests and several medium-and long-range missile test firings, it had not been known whether the regime had developed a nuclear warhead sufficiently small to fit on top of a missile with the range to reach the continental United States.

“Personally I think that they certainly have had the expertise in the past. They’ve had the right connections [with Iran and Pakistan],” commented Scaparrotti, “and so I believe have the capability to have miniaturized a [nuclear] device at this point, and they have the technology to potentially actually deliver what they say they have [and] I think they have a launcher that will carry it at this point.”

To date, experts have predominantly asserted that North Korea would not master for several more years the ability to miniaturize a nuclear warhead and deliver it via missile. Media reports habitually declare that North Korean missiles cannot yet reach the United States.

However, as I testified before Congress in March 2014, that benign assumption is flawed since, for example, it gives insufficient weight to Pyongyang’s lengthy collaborative nuclear and missile relationship with Pakistan, a country that all experts assess already has nuclear weapons deliverable by missile. North Korean scientists provided critical assistance to Islamabad’s missile programs in return for reciprocal uranium-based nuclear weapon expertise, technology and components.

Available unclassified evidence indicates North Korea has likely already achieved warhead miniaturization, the ability to place nuclear weapons on its medium-range missiles and a preliminary ability to reach the continental United States with a missile.

U.S. experts concluded that the recovered North Korean missile provided “tangible proof that North Korea was building the missile’s cone at dimensions for a nuclear warhead, durable enough to be placed on a long-range missile that could re-enter the earth’s atmosphere from space.” A U.S. official added that South Korea provided other intelligence suggesting that North Korea had “mastered the miniaturization and warhead design as well.”

Following an August 2013 meeting between South Korean Minister of Defense Kim Kwan-jin and U.S. Secretary of Defense Chuck Hagel, a Ministry of Defense official commented that both countries agreed that North Korea could “miniaturize nuclear warheads small enough to mount on ballistic missiles in the near future.”

During heightened tensions in 2013, Pyongyang threatened to turn Seoul and Washington into “seas of fire” through a “precise nuclear strike.” North Korea has repeatedly declared that it will never negotiate away the “treasured sword” of its nuclear arsenal, even revising the constitution to enshrine itself as a nuclear nation.